The release part of tnr, and the socialization part

We sent Miss Marble on her way outside again. :'( I always choke up when we release a feral back into the wild. It's such a bittersweet moment! It's where she belongs, though. She just was freaking out too much inside. She bounded off like a rabbit, straight to a hiding place she and the rest of the family use, under the cedar tree (surrounded by rosebushes). Then, when she saw us wave at her and realized we could still see her, she bounded off to another favorite place, through the back fence into the wilderness of the wetland behind us.

Hemming did very well with his testing today!  We are sooo proud of him!  There were a lot of dogs waiting in line, and one other cat who looked like him, only female and a little older.  This was his first experience being around dogs, and he aced it.  He meowed the whole time we were waiting, while the dogs barked.  I really wish more dog owners would put their dogs through obedience courses, or at least train them properly.  Two barked and lunged at a lady wearing a straw hat, another dog kept nipping at its neighbor in line, and a lady made her dog walk right down the line to the end rather than walking around a different way to get to the end.  Maybe the owners need obedience training, too?

When we got checked in, and were in line again waiting for the vet, a big dog who was behind us in line came over to the carrier and sniffed Hemming through the bars.  Hemming sniffed him back, and put one of his paws up to the mesh door like he was asking the dog to play with him!

The vet and vet tech who did the blood draw couldn't barely believe that Hemming was born feral and that we'd only had him a short time.  They both said he looked and acted like a tame kitten, and were quite impressed with him!  He was so calm for his blood draw, even came out of the carrier nicely after the vet tech scruffed him.  He flinched and tried to look at his leg when they poked him, but he didn't mew in surprise!  Afterward, he walked right back into his carrier on his own, after the vet tech redirected him from wanting to jump down off the table.  We get his test results back on Tuesday, but are fairly certain that he doesn't have any bad diseases. 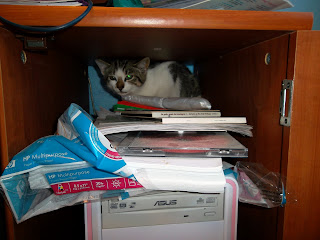 He's now in our office at home with the door closed, but free to roam in here.  He absolutely loves having a room of his own!  He walked around for a bit after I showed him his dishes and put him in the box to show him what that was, then I put him on my lap and petted him for a bit.  The first lap he's been on!  He wanted to climb, so he climbed up the door to the carrier, onto the top of it.  Then, after getting down from there, he climbed up the back of the computer desk onto the CPU tower and is very happy in his newfound nest.  Snuggly, purry, smiling, the picture of contentment!
Posted by PDX pride at 1:38 PM

Aw, Miss Marble...Some cats just can't be socialized and really it is better for them to be released. We'll purr she stays safe. We're so glad there will be no babies, though!

But Hemming! Well, what a sweetie, what a doll. What a good boy! :-) Paws crossed for his test results!

Some cats do prefer the outside! Good for Hemming!

Aw, it musta been sad to see Miss Marble go...but you did the right thing for her. We're purring for good test results for Hemming!

We are so happy fur Hemming! We purr that he passed his tests. Mebbe eventually Miss Marble will calm down. Fur now, it's so great seeing kitten pics! Happy Sunday.

Hemming sounds like an amazing kitty! I am glad he aced his tests. Too bad for Miss Marble that she didn't - she does not know what she is missing!

We understand. Even though it must've been hard to let Miss Marble outside, you did the right thing.