Happy 6th Purrthday to the Twins! 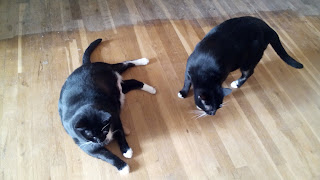 Their mom-cat was a tuxie and their dad-cat was a neighborhood Siamese.  They were born at their mom-cat's home, but the humans there didn't want to keep them and got the mom-cat spayed shortly after. 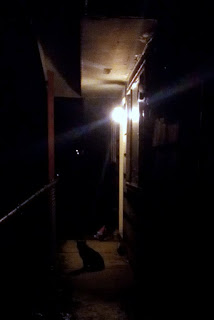 Usually I eat at the back porch food bowl, but sometimes the raccoons get there first.  When that happens, I go hang out by the front door of the house, because sometimes the humans will put a little pile of food out here.  They were coming home when I was checking, and startled me!  Once they were inside, they got food for me and put it out where I was waiting, then called for me.

Are you a photohunter?

What Starla Did on her Gotcha Day! 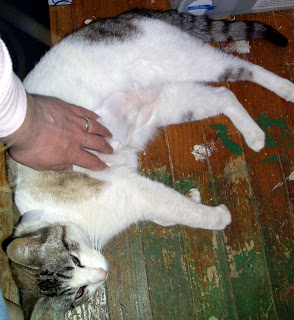 Today was my Gotcha Day Annifursary!  I can't believe it's been seven years already since I was adopted by Uncle Skylar!  The piccy above was me on the first full day (the 4th) I was a member of this household, when Smokey and I both got spayed.  I came inside the afternoon before, so on the 3rd, which is why we celebrate the 3rd.

I was just shy of my 2nd birthday when I was adopted, at least that's why my purrents think.  I'm not telling for sure!  They didn't know me as a baby kitten, only after I moved in two houses from them in Portland.  My mom-cat and Little Bit's (and Smokey's) mom-cat were sisters from the same litter, making me cousins with Little Bit.  The same people had Little Bit's mom-cat who had me, because they took me from my feral mom-cat when they moved with Boo-Boo Kitty (who they had adopted).

I became a semi-feral, semi-socialized young cat, then I found the green house.  It had a nice, warm, dry basement that I could get into from the outside, a porch with a food bowl, and sometimes the humans would bring me inside.  They made plans to foster me when they were told by "my" humans that they could.  My spay was scheduled.

They brought me inside the day before, and told me I would be staying.  I didn't know what that meant, but it sounded nice.  The next day, Smokey and I went to the vet and got spayed, then came back.  We got chilled, even though we had a fleece blankie around us and one over the stroller, so Uncle Skylar hopped up on the couch to snuggle me warm.  He looked at the humans, curled around me, and that was that!  We were besties from then on.  I miss him a lot.

Slowly, I got used to the other cats in the household, and now I'm friends with everyone.  I still worry some about Carbon, because he likes to be threatening, but I don't hide.  I mainly spend time on the dishwasher in the kitchen, but I also like the sun puddles in the dining room, if Carbon's not easily seen.  I still have anxiety issues, and have to be "flown" in or herded in to the bathroom for potty time.  I use the tub still if I make it in there; otherwise, I use the kitchen floor and then Mommy cleans it up.

Mixx doggy and I are still besties!  I'm "his" kitty and he's "my" woofie.  We both get big smiles when we see each other, and happy ears!