Wordy Wednesday: Catching up on the news, pt. 2 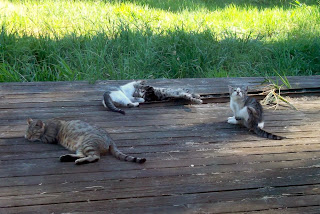 My boys and I have been hanging out at the house for the past week, right up close most of the time.  When we need shelter, we've been hiding in the roses around the cedar tree, just off to the right of the picture above.  It makes a great hideout, and we're camouflaged from the raccoons (even though they haven't done anything bad to us).  The lady and man say that next week there will be wire boxes over our food.  I'm not sure about that, but as long as we can still get to the food I don't have a problem with it.  At least, not until I see the boxes.

The lady (and sometimes the man) comes out at about 9 pm to put water in the bowl and put food out for us.  We show up, and if the humans are running late my kittens tap on the glass while I wait expectantly about a foot from the window.  When the humans come out, I back up but am still pretty close.  I'm learning to trust them, so I let them be within 3 feet of me now!  My babies run, but pop right back up and investigate.  My striped boy was mewing to the man, and the man meowed back to him!  My little one didn't know the humans could speak our language, so he looked from the man to me, and back again to him, then mewed again and got an answer again! 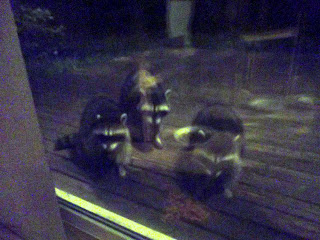 I had three kits around the time that Mama Leopard had her kits.  Now that they are old enough to travel well and eat regular food, I have shown them where the cat food is.  Since my kits are so young, I usually accompany them.  The picture above shows me in the middle and two of my kits.  However, two nights ago I let them go on their own to the food place.  I should have known better!  They are too young to handle the ones on the other side of the window!  The one on the other side of the window who looks like us, Little Bit, likes to jump at me when I eat.  Since I wasn't there, she jumped at my kits, and they jumped back, thinking she was going to come out and play with them!  They don't know what cats are, and thought she was another baby raccoon.  All three jumped at her at the same time, hitting the window with a bang.  That scared Little Bit, and she meowed at them.  They got confused, stood up, and put their front paws on the window, looking in at her.  She jumped again and they jumped again.  The human came and removed Little Bit.  Then the human came back to the window, knelt down, and looked my three babies straight in the eyes.  In a commanding voice, she told them that they could not jump at the window like that, Little Bit was not going to come out to play, and they had better be nice.  They looked at her, got down on all fours again, and backed up.  Still looking over their shoulders, they ran back to where I was and told me all about it!
Posted by PDX pride at 5:04 AM

Kittens, coons, oh my! You haf a real menagerie! So cute to watch! Happy Wednesday. Purrs.

Wow! Sounds like there's never a dull moment there! We loved the pictures of the kits and the raccoons. :)

How is your dad's back?