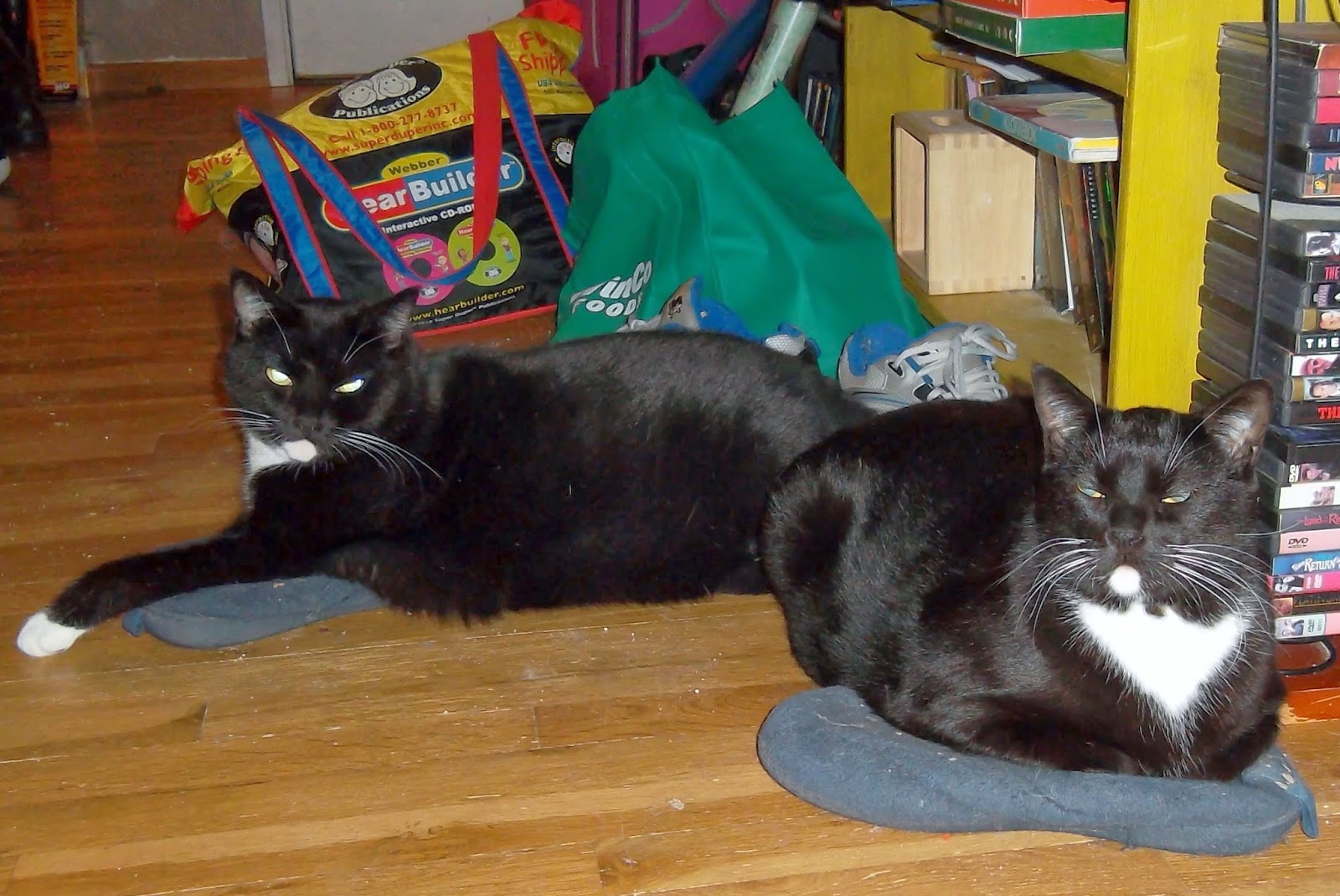 Wait, it's our birthday already?  How can we be four years old?  It doesn't seem like it was that long ago that we were babies.  We were born to a pet tuxedo cat, but the dad in the household didn't want us kittens.  There were four of us in the litter:  two boys and two girls.  We weren't named until we got to the shelter, and then we all got names starting with F:  Fonz (Heimdall), Furkins (Freya), Fizz, and Fink.  Our momcat stayed a pet cat to our first family.  We kittens were brought to Salem Friends of Felines in Salem, OR, where we were taken care of, checked out by a vet, and given a temporary home in the kitten room.  That's a special part of the shelter where all the kittens hang out!  It's a pretty cool room, about half the size of a typical bathroom in a human house, with shelves, cat toys, hiding boxes with cutouts to play paws in, and cat trees.  Of course, it also has litter boxes, food bowls, and water bowls.  Oh, and a window to see the humans.  Anyone who visits the shelter can go visit the kittens, and we loved it there.  We were there for a long time, though!

We plan to celebrate our 4th birthday by snuggling with Mommy and Daddy, maybe getting petted by Grandma, and playing with the rest of the family.  Oh, and possibly birdwatching, because the spring birds are starting to arrive!

In case you're wondering who is who in the picture, Freya is on the left and Heimdall is on the right.  We love our daddy's slippers!
Posted by PDX pride at 3:09 AM 10 comments:

Hi everyone!  I'm back to visiting again!  We took a break for a couple months, because Mommy wasn't feeling well and we had Grandma moving in, but now we're back.  I'm sooooo happy!

We love overhearing conversations on the bus and MAX train when we ride.  It's fun how my presence on public transportation gets people talking about their own cats, even if it's not directly to us.  We heard one person who had always wanted an ocelot as a pet, but couldn't get a permit to own one because they are wild animals.  He got a Savannah instead, which is a domestic cat but has been bred from an African serval (wild animal) and a domestic cat.  We also heard about a long-haired black polydactyl cat that a homeless couple has.  They are trying to find a place to live and may have to give their cat up to be able to live in low-income housing.  Most low-income housing doesn't allow pets (other than emotional service animals, which need a doctor's note).  That would be sad if they had to give up their kitty!  I made them very happy by purring for them while they petted me.

We got on one MAX, but the driver told everyone that it wasn't in service, so everyone got off again.  Why did it even let us on if it wasn't going to take us anywhere?  We had to wait another half hour for the next one, because they weren't running on time.  That made us late, and I don't like to be off-schedule!  Kitties love schedules and patterns, and I'm no exception.

When we got to H., the people there were off-schedule, too!  They'd gone on a field trip for lunch to a restaurant and were just getting back, so we waited a few minutes before going up to visit them to let them settle.  I saw them going up, and said hi to one of my friends before she got in the elevator, but we waited until they were in their rooms before "officially" visiting them.  That confused me, because I could see they were going back home and wanted to follow them, but Mommy said we needed to wait.  I kept asking her with my paw when we were waiting, to let her know that I wanted to get going.

Finally, we went upstairs!  We went to see my friend A.M. the first thing, and she had the picture of her and me in a frame on her shelves!  I love her so much and always snuggle with her.  One of her friends was there, and asked her if I was the kitty she loves so much.  She just smiled and hugged me.  Purrs!

We went to see more of our regulars, and it was so great to see them again!  They missed me as much as I had missed them, and were glad to see me again.  Mommy's friend L. from her former church held me and hugged me, saying how nice a kitty I was.  I purred hard for her, too, because she's one of my favorites as well.  We met a new friend, C., who told us about her kitty.  She and her husband have a kitty they took in, but then the kitty showed up one day with a collar and tag.  It turned out to belong to their neighbors, who are backyard neighbors!  The cat doesn't like to be alone, so when its people aren't there it visits C. and her husband!  We also heard about a cat who didn't want to move when its people moved.  It was hand-raised from a kitten, but became an outside cat with the backyard and surrounding area as its territory.  When its people moved, they took it with them but didn't move far, so the kitty kept going back to its territory.  Its people made arrangements with the family who had bought the property, who agreed to adopt the cat and care for it.  It's so wonderful when that happens so the kitty can stay in its territory!  We had that happen with our feral Shadow at our old house.  We weren't able to take her with us when we moved, but we arranged with Spongebob's person that he would take care of Shadow since Sponge was best friends with her.  I also visited with someone who is going to go home in the next week but was so glad that I came to visit her.  I could tell that she wasn't feeling well in her stomach so I snuggled up really close to her on her lap right away.  She, Mommy, and R. (who takes us around to everyone) visited while I snuggled, and talked all about how we cats just know when we're needed and where.  Well, of course we do!  That's why I visit!

After we were done visiting at H., we went to C.  We don't really have a set schedule at C. yet, so the person we usually visit wasn't available to visit.  I was disappointed, but then we went to another floor and I got to visit with three ladies who work there!  That was fun, because I got to settle on the rug while Mommy talked with one of the ladies.  She was quite impressed with me, especially when I asked her to pet me, and took our contact information so that we could get a set schedule there.  Someone called the next day, but Mommy missed the call.  She'll call back and then we'll set up a definite time to go visit more people there!

If that weren't exciting enough, we came home to a big surprise!  Go to the Oregon Humane Society's Doggie Dash page at this link, scroll down to where it says "Doggie Dash Poster" and click on either size.  Tell me what you see!  We got it in postcard-flyer form in the mail, and were so surprised!  Yes, we are definitely planning on going this year.
Posted by PDX pride at 7:24 PM 1 comment: 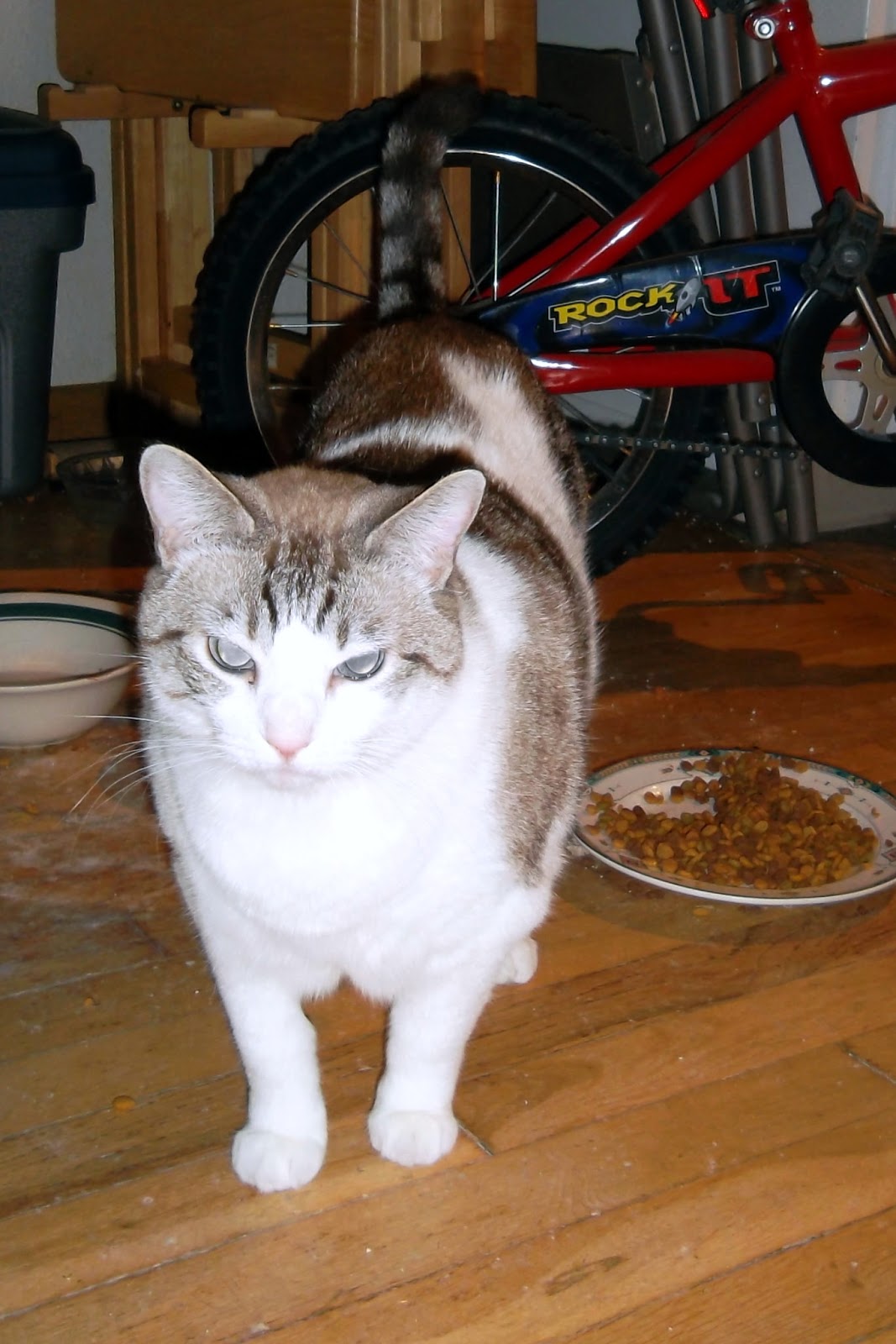 Happy Gotcha Day Anniversary to me!  I remember the day I was gotcha'd by my forever family!  I had wintered out the ice storm in their basement and it was finally starting to be spring.  I was coming inside to visit them frequently, along with the rest of my biological family (Smokey, Little Bit, and Boo-Boo Kitty).  Smokey and I were both in heat, so my forever purrents asked the people who actually owned me (two doors down) if they could adopt us, and the people said yes.  Smokey became a foster, and was then adopted to Mommy Erin and became her forever kitty.  I was going to be a foster, but something wonderful happened!  Besides getting spayed, that is, which in itself was a wonderful thing.  Not the surgery, but the fact that I didn't have to worry about that anymore.

The wonderful thing that happened was this:

I was brought inside so that I could have my surgery the next day.  After my surgery, Skylar curled around me on the futon and looked up at our purrents, pleading with his eyes for permission to keep me.  How could they deny him this wish, when he'd lost his sister a few months before, and we'd all lost Sara Kitty a few weeks before?  Of course, they told him that he could adopt me as his kitty!  Yep, that's right!  I was adopted by another kitty! 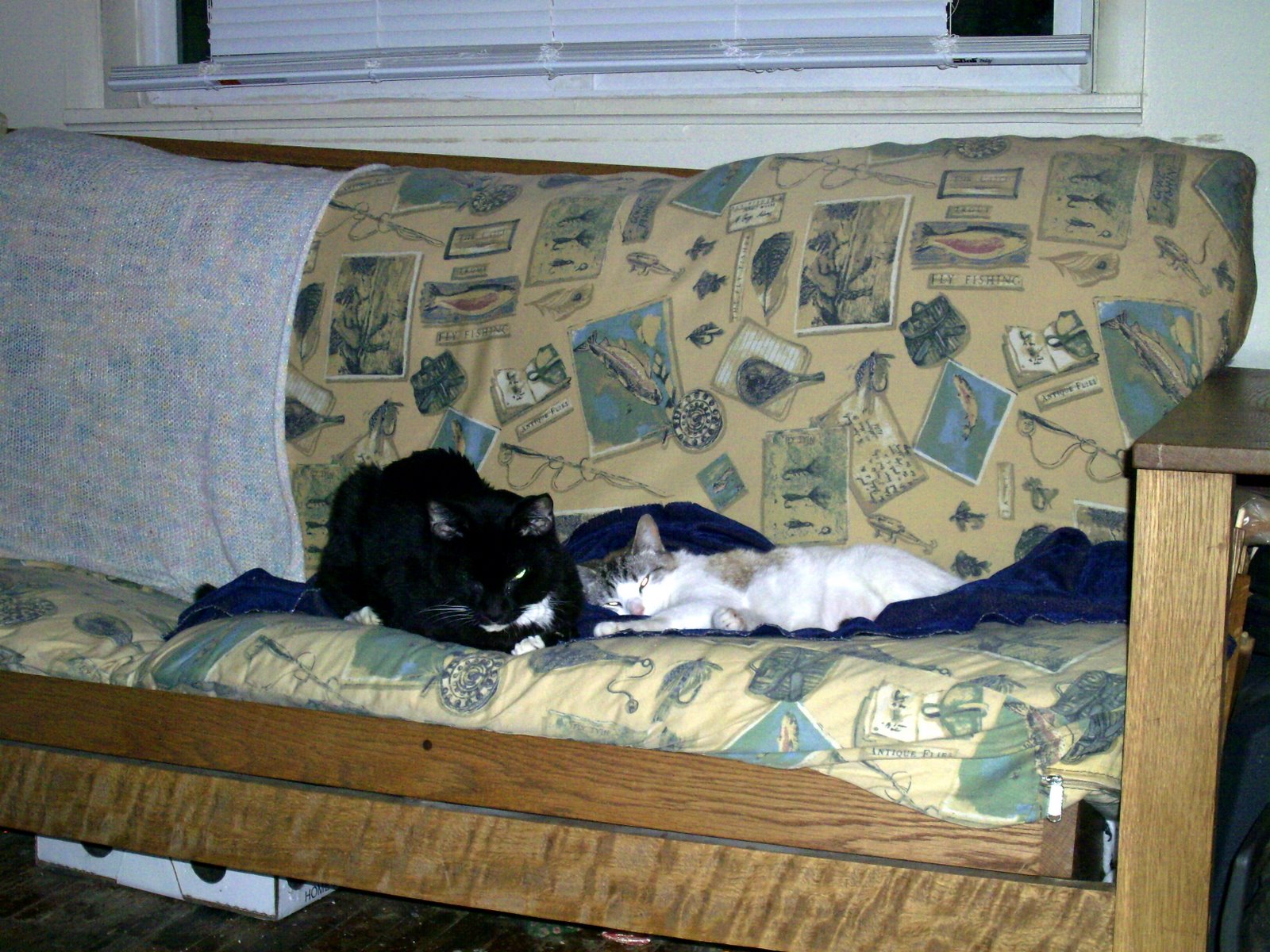 Here we are snuggling together, just after Skylar asked Mommy and Daddy if he could keep me!

He and I were best buddies until he went to the Bridge a few years ago.  Now, my best buddies are Rori, the twins, and Panther.  I live in the bathroom (yes, I "graduated" from my isolation room due to the Prozac helping my anxiety) and have my own special cave in there under the sink cabinet.  And, guess what?  I don't even need the Prozac anymore!  I haven't taken any for the last month and a half!  I'm going to celebrate my gotcha day anniversary by going to eat with the other kitties in the dining room, venturing into the living room to use the scratcher, and greeting Grandma in the hallway when she gets up!  Grandma gave us tuna a couple days ago, and I even went out to eat it with everyone else, sharing a plate with Dare!