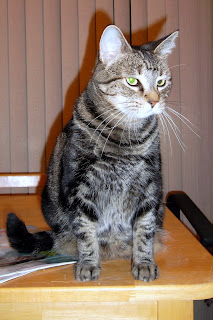 It was my 11th purrthday last Thursday!  I went visiting on Wednesday in my party dress, and everyone loved it.  I'm having to go on shorter visits now that I'm getting older, because of my arthritis, but I still can visit for an hour easily and 1 1/2 hours at my regular place.  That's plus the bus ride there and back!

Our humans have been rearranging all the furniture again!  Almost everything in the living room moved, and two bedrooms got switched almost completely!  I got to ride on a shelf as it was being moved, and the kittens we've been kitten-sitting didn't know what to do when the futon mattress came off so that could be moved.

We're posting our photohunt pictures late this time, because of all the rearranging.  Have fun guessing whose paws are whose, and we'll tell you on Thursday!  Carbon and Little Bit declined to pawticipate, because they wouldn't stay still for their paw pictures. 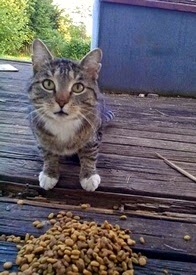 MOUSES!!!!  Of all things in the world to be eating MY cat food!  I let the raccoons, the occasional birdie, and the occasional possum eat MY food, but do I really need to put up with THIS????  A MOUSE has been consistently eating my food every morning!!!  He or she comes up the side of the deck by the food pile, then steals a few crunchies at a time.  Either he eats them on the spot or he takes them back to his storage, no one's sure.  Sometimes, he definitely eats them on the spot, because Panther has seen him do that!  Panther calls him HIS mouse, but I just want to make him my DINNER one of these days!  MOUSES, but that mousie gets on my nerves!

In other news, I've gotten to the point of sniffing the humans' hands when they leave them down for me!  I'll actually go up and nose-tap some of the time!  This is, of course, after I hiss at them for being late with my food.
Posted by PDX pride at 10:14 AM 4 comments: 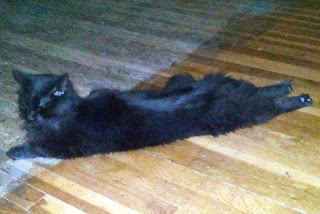 Don't worry, my purrthday wasn't forgotten!  Yesterday was just an extremely busy day around our house, with appointments for the humans and kitten-watching for us.  I had a good purrthday, though!  It was very relaxing, as you can tell from the above picture, MOL.  I snuggled with Daddy and later with Mommy, taught Bunny that the food plate is mine with a whap to the head (gently), and ran around playing with all kinds of toys that Mama Shawnee had taken out for us.  I even played Crazy Circle!

I turned 11 years old yesterday!  Yes, I'm a grouchy old man, but I can still tear up the house like a kitten when I want to, including going after a bouncy ball set loose in the kitchen!  The kittens were afraid of it, but I taught them how to whap it down mid-bounce. 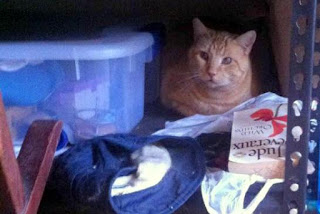 First of all, hi from my second-favorite spot in the whole house!  This shelf is the one I used to like when it was in my room, but now it's in the dining room.  I still love it, and will go out to it to sleep sometimes. 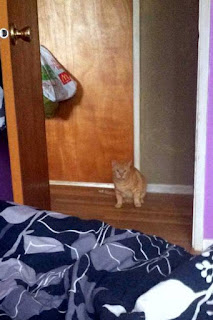 Mama Shawnee likes to take pictures of me.  She took the one of my shelf and also this one, of me spying on her.  She wasn't supposed to see me from her bed, but she did! 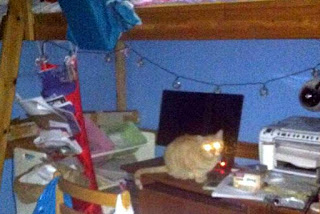 Just in the last few weeks, I've started hanging out on Mommy's desk while she's sleeping.  Once again, Mama Shawnee caught me in the act of being cute!  Mommy woke up to Mama Shawnee talking to me and the camera flash at 2 a.m.!

But, that's not the latest of the surprises.  We have two visitors from another kitty family!  We're kitten-sitting for a couple weeks.  Until now, I didn't know what kittens looked like or sounded like, since I haven't been around any since I was one.  I was quite confused when they appeared.  What were they?  Why did they move so fast?  Was it ok that they were wrestling?  Was it ok that they were eating my food, drinking my water, using my box, and climbing my kitty tree to check out my "house" cubby there?  Mooooooooommies!!!  Daaaaaaaddy!!!  They've been here three days now, and we're all getting used to them (and they to us).  I actually like them, and will go find them if I haven't seen them for a while!  They like me, too. 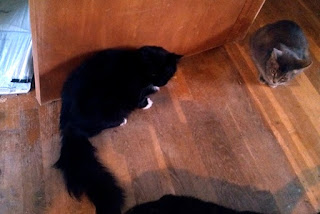 Bunny (on the left) is fun to watch zoom around.  Well, they're both fun to watch, but he runs with a lope!  He likes to play with Auntie Dare (on the right), who now thinks the kittens are fun to torment (in a good way). 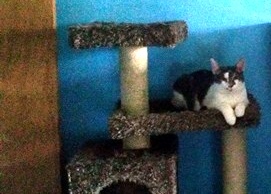 Prince Eric is very fast, and he loves my kitty tree!  I'll even let him sniff me sometimes, if he doesn't try to jump past my house (on the next shelf down) to get to his favorite place.

Their people need to move from the apartment where they've been to a new one, because of poor management and very poor maintenance.  While the family's moving, they've asked that the kittens stay with us.  Once the humans get settled, the kittens will go back to them at their new home.  If you could help Prince Eric and Bunny's people with some green papers, their GoFundMe is here.  It's set up and monitored by them, not us.  Please, no rude comments.  Everyone's trying to help them and the others at those apartments.  Thank you.