My leg is feeling much better now!  Thank you all very much for your purrs and prayers!  I stayed inside last night and the night before, and took it easy during the day outside.  Tigress brought me fresh-caught mice to help me, so I didn't need to go hunting and could rest my leg.  I'm putting weight on it normally this afternoon.  I probably just strained it hunting or playing.
Posted by PDX pride at 12:35 PM 6 comments: 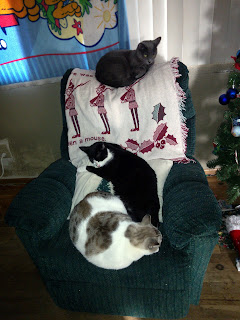 Smokey prefers the upper level on her chair, while Scamper and Starla both prefer the lower level.

My right hind leg hurts!  I don't want to put weight on it, although I can.  Tonight, I came around to the front door when the back door wouldn't open, to see if there was someone at the front door of the house.  Mommy's dad's car was in the driveway, with Mommy and her dad inside.  They saw that I was limping, so Mommy got out and tried to get me.  I ran around the house, so she went inside and got me to come in through the back door.  She checked me over for obvious tears, bites, or breaks, but she didn't find any.  She and her dad brought the groceries in, because they had just come from the store, while I cried for outside.  Then, Mommy checked me over again, because I was stretching up to the door handle while standing on both my hind legs, but I still was favoring my right leg.

I didn't like her checking my leg.  I tried biting, tried batting her away, but neither very forcefully so I didn't hurt her.  I didn't want her to hurt, but I did want her to stop bothering my leg.  She stretched it out, then checked all the muscle groups and bones that she could touch.  The back of the top part of my leg is what I reacted to the most.

She called Daddy, who told her to monitor me.  He also said if I wanted to go out that much, to let me out.  I was kept inside for a while, but then I was let back out because I was putting everyone else on edge with my screaming for outside.  My sister and I were sitting on opposite sides of the back door, screaming to be with each other.  Mommy hopes I will come inside in a little while when it's time to snuggle with her, like I've been doing almost every night since my last ordeal.

Daddy thinks it's probably a strain or a sprain, and everyone is hoping that it will feel better on its own.  I don't want to go to that vet place again, even though they were nice to me there.
Posted by PDX pride at 2:38 AM 4 comments:

Some of you guessed that I was the one hiding under the chair (kudos to Sparkle!), on my first big adventure inside since my spay a few months ago!  Well, was it ever an adventure!  I'd met some of the inside cats before, just to sniff or touch noses, from either my spay-recovery trap or the open door.  This was my first official meeting with Dare and Scamper, though.

Dare decided that I was interesting enough to follow around the house.  Yes, you read that right!  I explored the house!  I first ate from the food plate, then had some water, with my sister's encouragement while others looked on and Mommy petted me.  Then the heater went on and Mommy asked me if it was ok if she shut the door to keep the warm air in.  She and Daddy have been\ doing that with me for a few weeks now, and I like the warmth on my fur.  It really is much warmer with the door shut.  When the heat went on, I was a little startled by the sound, but then it became interesting when I saw the blinds move over the vent.  I went to explore it, and meowed happily when I felt the wind blowing my fur!

Somebody was on something called a chair, underneath something called a table.  My sister hopped up on one of the chair things, but I was too chicken to join her.  I walked under the table, then to the computer desk.  I found a long, open place called a hallway, but didn't go down it.  I was much more interested in the living room, which was really open.  It reminded me of my deck, so I felt safer there.  There were more chairs, although these were covered in something soft, and a big chair called a couch.  I walked around until I heard Daddy snoring, then dove under the couch into the corner.  Dare followed me but let me have some space, which I was glad about since she'd been following me nose-to-tail since I walked in.  Mommy tried to get a good picture of me, but every time she got close, I moved to another place.  If she aimed the camera at the couch, I moved underneath the chair.  If she tried to crouch down to take a picture of the chair, I ran to the couch again.  I was way too quick for her!  She got a picture of Dare checking on me, though.  (See two posts back.)

After all that exploring, and the nice warmth of the heater, I was getting very sleepy.  I felt comfortable and safe under the blue chair, and I knew my sister was inside as well, so I took a nap.  I thought I would only sleep for a little while, but I slept five hours!  Mommy was so happy!  She stayed up in case I wanted out, but she didn't think I would stay in that long!  I was soooo tired.

As soon as I woke up, I started pacing and crying.  I'd forgotten for a few minutes that I'd come inside, so I was very disoriented and felt trapped.  I ran all over the place, tried to get out the door (which wasn't open right away), then tried to get out the stove!  Yep, I thought the stove was the door!  Mommy opened the door a little way, then came into the kitchen to get me.  She thought she'd herd me toward the door, but I didn't want to move from the corner.  She picked me up right under the armpits, gently but firmly, and "flew" me to the door, opening it further when we got to it.  I went right out, then she put some food outside to let me know it was ok.

Just a few minutes ago, I came in again for some food and to explore the dining room a little.  She shut the door, but let me out right away when I asked her to.  Maybe it's a Wednesday morning thing? 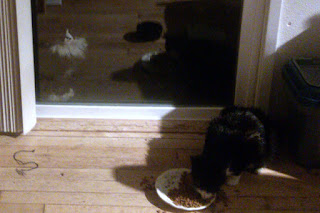 Hi!  I'm a reticent guy, but the outside girls have kept me company for a few months out here in the yard.  I've been around since just before Tigress got spayed, but hadn't come close until this last week.  I decided it's much nicer when the people know I'm here, because then they come with scoops of food for me.  Can you see me at the door waiting for my scoop while Scamper eats?

I'm longhaired, with white boots, shirtfront, stomach, and nose (except for a black splotch on my nose).  I'm about as big as Carbon, but younger.  The people think I'm about three or four years old, but I'm not telling.  I could be as young as two.

I'm getting to the point now where I only run a short distance away when the people open the door.  I run to the edge of the deck, sometimes diving but most of the time staying up, then turn and look at them.  Once they close the door, then I approach the food and eat.  However, the lady didn't close the door all the way one time last week because she was talking to me, and I approached to eat.  She put her hand within sniffing distance and held it there while I ate.  Then, I came closer at the same time as she reached down, and her fingers brushed my fur!  I pulled away, looked at her, looked at her hand, then went back to eating.  It felt kind of nice to be touched!  She touched me again, very gently, and I leaned in so she was petting the edges of my long fur.  I let her do that for about two minutes, then I had enough and walked away.  She shut the door so I could eat in peace then.
Posted by PDX pride at 4:52 AM 3 comments: 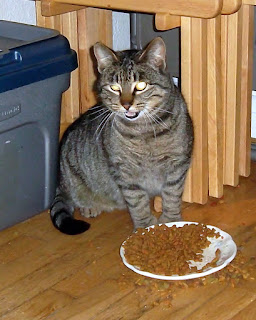 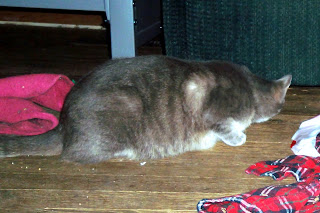