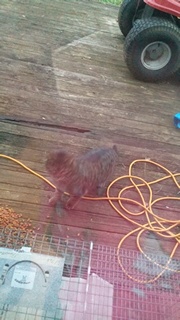 Daddy and Mommy are trying to trap my buddy Niss this weekend to get him fixed, so there is that trap on the deck again.  I hate the trap, but it's one more reason I know I'm home, so I marked it with my scent by rubbing my cheek against it while I ate.  Daddy was watching the backyard, hoping to see Niss out there so they could call him over to get him used to the trap, and he saw me making my way through the back gate!  He couldn't tell from that distance who it was, so he told Mommy it was Niss, but she could tell when she looked out because I was in the middle of the yard by then.

I sat in the yard meowing for a while, then dove under the deck and came out with a fat, juicy mouse.  I ran off with it through the back gate, but then came back just a short while later.  I circled the yard, meowing, and both my purrents meowed back and talked with me through the windows.  I went under the deck to rest for a bit, and then slowly circled closer to the food that they'd put on the deck.  I was hungry, but I still wasn't completely sure if I was safe, or if I was dreaming and would wake up and not be here but somewhere that wasn't safe instead.  Also, it'll take me a while to get used to the other cats again because I automatically am distrustful of others until I can smell them and they can smell me, even if I can already tell they're my family.  That's how I was the last time I disappeared, too.

I ate while I talked with Mommy, and a couple of the others stuck their heads out the door to say hi.  One tried to climb up on the trap to say hi to me, but I ran off and Mommy put her back inside the house.  I came back within a few minutes, though.  Whenever Mommy would try to shut the door after talking with me, I would walk over to the middle of it and yell at her to open it again.  I didn't want her to go away!  She would open the door back up and talk with me again.  I didn't want her to reach out to pet me yet, though.

She eventually had to go take a nap, but she told me she would be back after a while.  When she came back to the door, I was ready!  I got more food, and reached out to ask her with my paw if she would pet me while I ate.  She did!  This is real!  I am home!  I got ear scritches, neck scritches, back scritches, and side scritches!  I haven't stopped making happy paws all over the deck and purring!  I even wanted her to rub my left ear like she used to when I was a kitten, and she remembered!  I gave her love bites every so often to make sure she was real and hadn't dissolved.  She and I even played a petting game like we used to, where she reaches for the top of my head, then I duck her hand and bump it with the side of my face, then play-bite (just a love-bite) and pull her hand closer to pet me.  She remembered that, too!

She has to go back all the way inside now and close the door for a while, so I'm going to stay right here and reacclimate myself, even if I do have to be by that trap.  I see Sherbet has learned how to play with Autumn, and things have moved around quite a bit in the house, but it's still mine and it's still home!  I'll probably investigate inside, but it'll probably take me a few more days to set foot in there and properly greet everyone and everything.
Posted by PDX pride at 11:48 PM 8 comments: