Both kittens came through surgery fine

Both kittens are recovering.  The marbled kitten turned out to be a little female, so her new name is Miss Marble.  She scratched, bit, and took off running through the house when I was transferring her to a carrier from the trap.  Not a good idea for her!  I'm alright, she's recovered from her scare, and she's in the carrier with food and water.  The polydactyl tabby/white kitten is a male, but had only one testicle.  They thought the other one might not have dropped yet, so they did an exploratory surgery, and it simply wasn't there!  His new name is Hemming.  He let me pet his paw pads, stretched his foot through the mesh on the trap, and put his head in my hand with his tongue sticking out, wiggling the tip of his tongue in nursing fashion as I was petting his nose!  He's taking a bit longer to wake up completely, and still hasn't woken up completely even though it's been about 6 hours.  I'm kind of worried about that, although he's looking at me when I talk to him.  He'll sit against the side of the carrier, then slowly start to tip over the other way, then correct himself.  He likes sitting better than lying down right now, for some reason.  Both kittens have eaten and had some water.

Tomorrow morning they go in to the mobile clinic at Petco for their FeLV/FIV testing.  They got their rabies shots today and first boosters.

At this point, we are pretty sure that Miss Marble is going back outside after the weekend's over, given her run around the house this afternoon.  Hemming seems like he wants human contact, so he's a good candidate for socialization, depending on how his personality is when he wakes up fully. 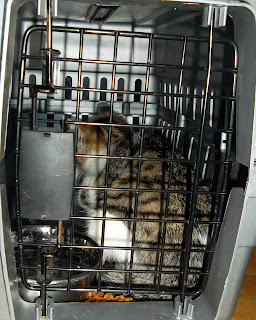 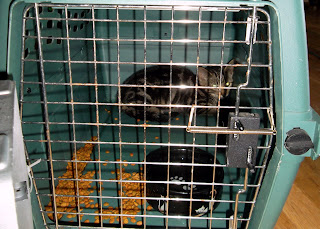 Glad they are doing well-

Very relieved that everything went well!

We're glad they came through okay, purrs for a speedy recovery.

Somehow our mom's not surprised the male wants company and the female is hissy and anti-social. LOL.

Yay! We are so happy they are ok. Such cute little kittehz. Purrs.