Newsflash: Tabby's eating on her own!

Email ThisBlogThis!Share to TwitterShare to FacebookShare to Pinterest
Labels: tabby

The vet called today with the results of my bloodwork.  My liver enzyme levels are elevated, so the vet thinks that I probably have hyperthyroidism (also known as hyper-T).  It's managed with medication (methimazole) and retesting as needed.  I go in on Friday for them to test my thyroid levels with more blood draws, to see that the diagnosis is correct and to evaluate the dosage of medication.  Thanks so much for all your purrs, prayers, and good thoughts!  I ate (was force-fed by Mommy) one whole teaspoon of food at my last feeding! *glares at Mommy, though*
Posted by PDX pride at 10:43 PM 4 comments:

Updates on Tigress and Tabby

Mommy's making sure I eat something, but I don't want to!  She's force-feeding me canned food, but she can only get 1/2 teaspoon into me at a time before I absolutely refuse and spit the glob out.  I'm keeping the food down (except for once yesterday morning), but it's not tasting or smelling good to me.  We're hoping for the results of my blood test back on Monday.  The vet's office was supposed to tell us on Friday, but they didn't call, so my purrents will call on Monday to see what's going on with the results.  Thanks for all your purrs, prayers, and well-wishes!

I had a very scary couple of days!  I was inside in that trap thing for a few hours, then the humans picked me up and put me into a car.  I've never been in a car, and I was taught to stay well away from roads when I was still a very young kitten.  Being this close to humans is new to me, too, even though I'd seen them on the other side of the glass before.  The humans took me to a vet place, called the Feral Cat Coalition of Oregon, where they left me!  There were other cats in traps, and they were as scared and confused as I was.  We all were so quiet, except for a couple screaming cats, because we were so scared.  Since we'd all lived outside, we knew that silence was the key to being invisible.

It didn't work this time.  I was picked up again in the trap and carried somewhere, then given a shot.  I suddenly felt very sleepy!  When I woke up, I had been poked a couple more times (vaccinations), had part of my right ear gone (to mark me as a fixed, cared-for feral), and had been cut open then glued shut!  I had also been shaved on my belly.

While I was under anesthesia, the vet discovered that I was pregnant.  Mommy and Daddy had thought I might be, probably two or three weeks along, but made the decision to go ahead with my spay anyway.  They said that I would be much healthier that way, and not have to have all the stress of young motherhood.  It was a heart-wrenching decision for them, especially for Mommy, but they feel that it was for the best.  With the kittens, I was 9.1 pounds before my spay.

The humans came and took me back home.  I'm a very good car cat, actually, and they were really proud of me.  I didn't sing in the car, just watched everything going by.  Seatbelts are the most interesting part of the car!  I had gotten one of my claws caught in the trap wire, so I was bleeding a little from that, but it stopped right away.  I've got two extra toes on my right front paw and three extra on my left front paw, so it's no wonder I got one caught.

Yesterday, I was recovered more from the anesthesia, and wanting out of that trap!  I tried and tried to find a way out, especially after I peed on the newspaper.  My sister came inside to check on me and was trying to help me get out, but neither of us could find the way to open the trap.  Finally, Mommy took the trap outside and let me go.  I slithered out and zoomed under the deck, while my sister mewed happily.  I was back in a few hours for dinner, though!

Tigress is trapped, and that's a good thing!

Hi, Striped Girl here, although I've got a real name now.  I'm named Tigress!  The daddy chose my name.  A couple days ago, this strange wire box reappeared on top of our eating place on the deck.  My sister wasn't afraid of it, so she went right in to eat and I followed her.  There was yummy soft food in the wire box, so that wasn't too bad.  I was nervous about it, but my sister wasn't, and I trust her judgement.

Turns out it was a trap!  Literally!  This morning, when I went to eat, my sister was already inside the house visiting with everyone.  The mommy put the yummy soft food in the wire box and called me, so I went in to eat.  At first, it was fine, because the plate was close and I could reach the food easily.  I stepped forward two paws to get a chunk of food that had fallen in back of the paper plate, and SNAP went the trap door!  I freaked out, tried to get out, called for my sister in my loudest voice, but nothing worked.

The mommy came outside, put a towel over the trap, and picked it up with me inside!  I was so scared, more scared than I've ever been in my life!  Then, all of a sudden, I realized there were other cats around me, cats that I had seen and smelled before.  Rori came and lay down beside the trap once the mommy put it down, reassuring me by her presence that this is a house where cats are welcome.  She told me that it is safe in here and that everyone loves me.  I calmed right down.  Then, another cat came over.  His name is Heimdall, and he kind of scared me at first, because he jumped on top of the trap!  I wasn't sure what was going on, so I held very still, but then I realized that he was just sniffing me.

My sister was startled to see me in the trap, because it reminded her of when she was trapped.  She wanted outside again, so the mommy let her out.  Two minutes later, she wanted back in.  She then came over to me and showed me one of her favorite toys, called a Crazy Circle.  It's a ball that goes around each time you bat at it.  I've never had any toys that didn't smell of the outdoors, so I watched this new thing closely.  My sister tried to give it to me by pushing it against the trap wall, but I couldn't get to it through the wire.  She lay down against the wall and batted the ball around so I could see how it worked. 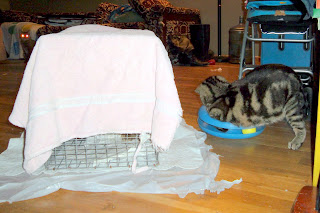 The mommy says I'm going to go to the vet place later on today to get spayed.  I'll be trapped in this wire box for the weekend while I heal, then I'll get to go back outside to my home.
Posted by PDX pride at 4:39 AM 5 comments:

My vet visit went well. I love our doctors! I got fluids, which I didn't like because the lump went over to the side. They took some blood for testing, and we'll get results tomorrow. My teeth, eyes, fur, and ears all look good, as well as other vitals. We'll know more when the blood test results come back.
Posted by PDX pride at 1:30 PM 4 comments:

Mommy gave me some more very soft food (she calls it "pate") a few minutes ago.  I licked it and licked it, and then I bit it!  I only took a few bites, but Mommy says that it was so good of me to take some bites.  I let Carbon have some of it, too.
Posted by PDX pride at 3:29 AM 6 comments:

I'm not feeling well.  I've been losing a lot of weight, even more than I was supposed to.  I have a vet appointment tomorrow, so until then I'm snuggling with Mommy and Daddy.  They've been trying to feed me yummy canned food, but I only lick the juice.  Carbon eats the rest for me, and so do the others, but the juice is yummy.  Sorry I haven't written about my visits to H. recently.  Mommy hasn't felt like typing for me when I've not been feeling well, but my visits went well and I enjoyed snuggling on people's beds.  They're doing a lot of construction at H. right now, and Little Bit freaked out, so we're not bringing her back there.
Posted by PDX pride at 1:15 PM 8 comments: 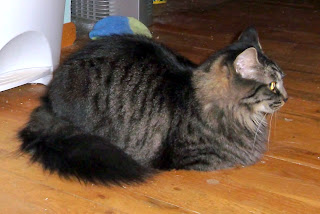 It's my 4th birthday today, or as near as my purrents have decided.  Four years ago, my sisters Smokey, Baby Chiba, and I were born to our mama Boo-Boo Kitty in Portland, OR.  Smokey lives with a friend, and Baby Chiba died as a kitten, and I'm doing really well with everyone here in Vancouver, WA!

I didn't go visiting when Tabby went a week ago (she promises to write about it later), because I fell off the top of the stroller while Mommy was getting us ready.  She had put me in the carrier, put the carrier on the stroller, and then turned to talk to one of the twins.  I rolled myself off the stroller!  I'm fine, but I was shaken up for about 10 minutes afterward and didn't want to go back into the carrier.  Mommy promises never to do that again, and always to have at least one hand on the carrier if it's on the stroller.  It scared her as much as it did me!

I'm having a great birthday running around with the twins!  I hopped up to groom my half-sister Rori (who's almost a year older than me) for a while this morning, then got back down off the bed to play again.  ZOOOOOOM!!!!!
Posted by PDX pride at 1:55 PM 8 comments: 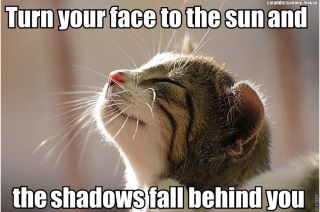 Happy Easter from all of us at the PDX pride!