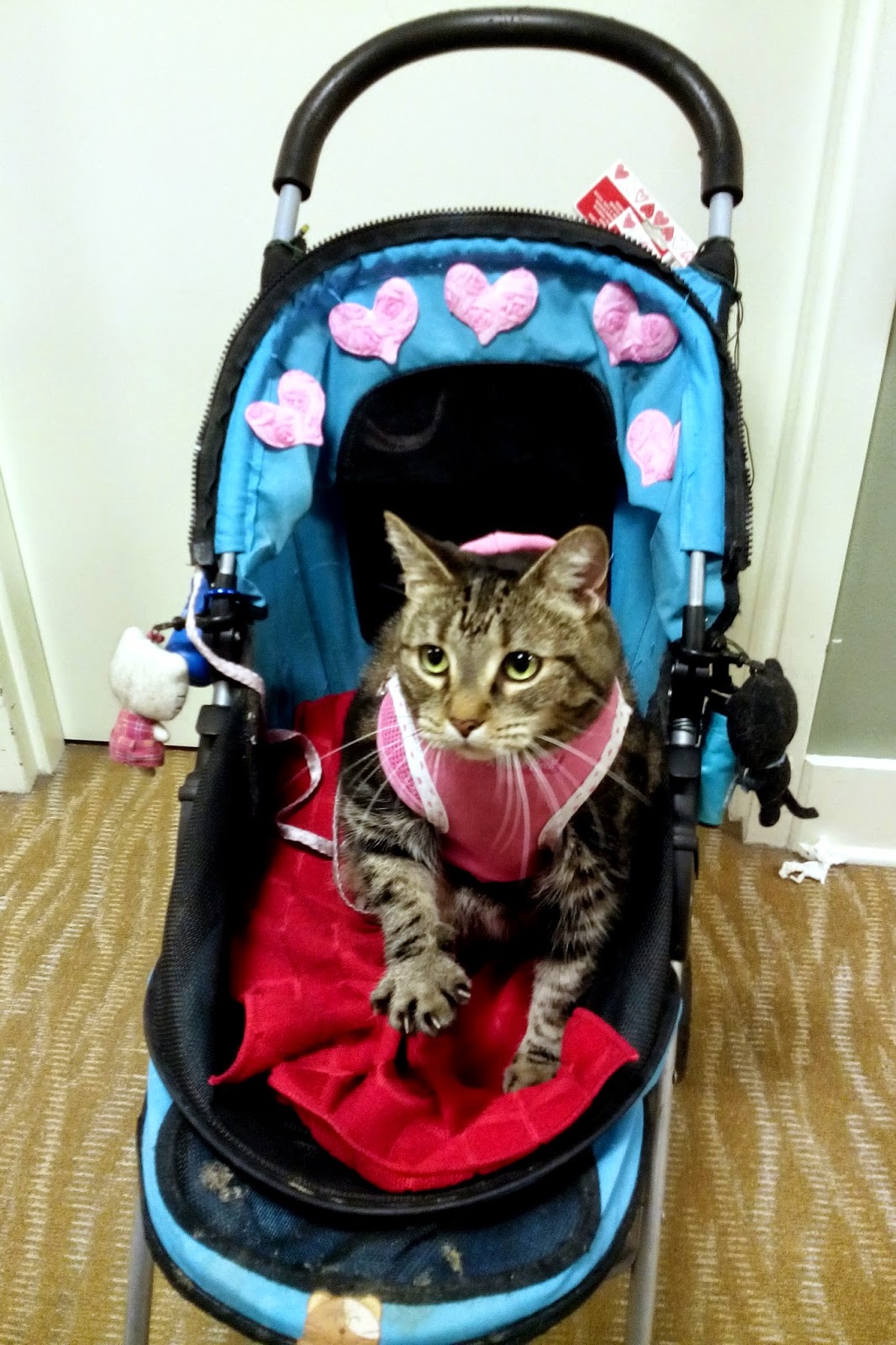 Hi!  Happy belated Valentine's Day!  These are my "wheels", my stroller for visiting.  Since we visited a week ago Wednesday, we went with a Valentine's theme for my stroller and outfit.  I wore my "Mommy's Sweetheart" pink dress/shirt over my pink harness.  It was very comfy, especially in the wind when we were outside!  Mommy and I stopped at the Dollar Tree on the way to H. to get the decorations.  The puffy fabric hearts on the top part of my stroller are actually stickers!  Autumn attacked them the moment we got back home, and actually ripped them in half, but they looked very cute while I was visiting.  Once Mommy put them up there, I had to sniff them to investigate.  I then asked her what she'd done to my ride!  She assured me it was just temporary, so I left the hearts alone.  Mommy and S. had a good laugh over my worry, though, and so did I after I thought about it.  I kept on looking at the hearts and purring contentedly.

The red blanket is actually a hand towel, once again from the Dollar Tree.  We love shopping there!  We also got some plastic boxes that are shaped like conversation hearts, except they don't have anything written on them.  We gave them to my friends for Valentine's Day, and they loved them!  Some people were going to use them to collect coins, and others were going to use them for rings.  Some didn't know what they were going to use them for, but liked the idea.  One of my friends just found it amusing to keep opening and closing the box.  That works, too, because it's fine-motor therapy for her hands!

On the way to H., we rode the MAX light rail as usual.  While we were waiting for the train, Mommy was getting me ready and dressed.  One man took out his camera and took photos of me getting dressed, because he couldn't believe he was actually seeing that!  He asked our permission to put the pictures up on Instagram!  Wow!  Mommy doesn't have an Instagram account so we can't find the pictures, but it's really cool to think about that those are out there!

At H., my friend S. took us around with the list of people to visit.  Some were at the social hour, so we had to wait until they got back home to visit with them.  I wondered why they weren't in their rooms, but then it made sense when I saw them later.  One of the nurses stopped us to take pictures of me in my stroller (at the same time Mommy took the pic I posted here).  I love the paparazzi!  I posed for the cameraphone, and even "asked" for my picture to be taken!  See my paw?  That's how I ask for things, petting, and to ask a question of someone.  I taught myself how to do that when I was about a year old, and it's a very useful skill to have! 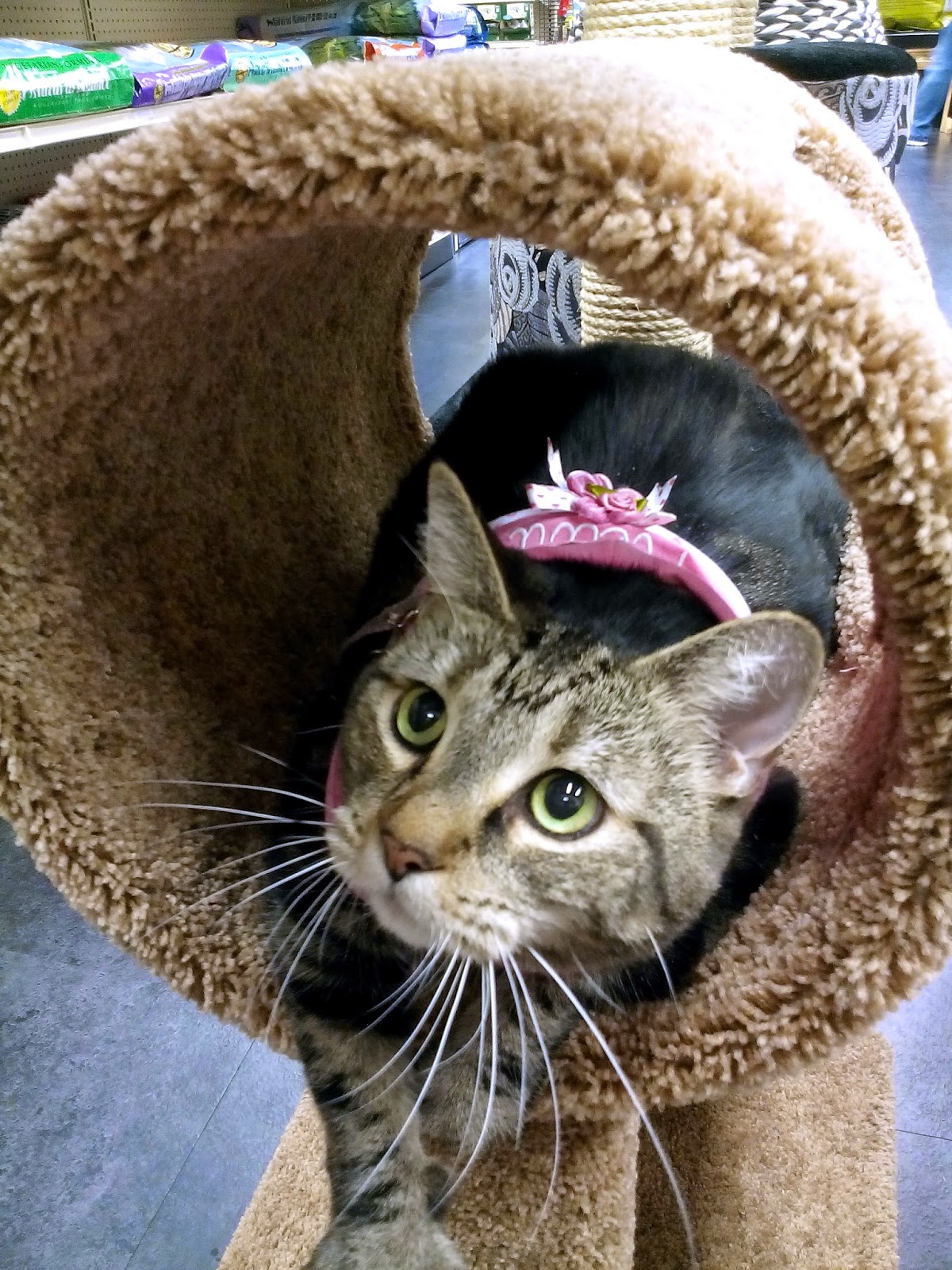 After our visit, Mommy took me to a pet store to get some new toys.  I found something I wanted to take home, but Mommy said we couldn't do that.  Bummer!  Does it count as a wheel, too?  It didn't roll, though, but it was fun to be in.  We did get a new crinkle ball and a big kitty straw to take home.

Walk your Dog/Cat Day is tomorrow.  Our friend Summer reminded us of that!  Are you going for a walk?  If so, please stay safe with your human!

Are you a photohunter? 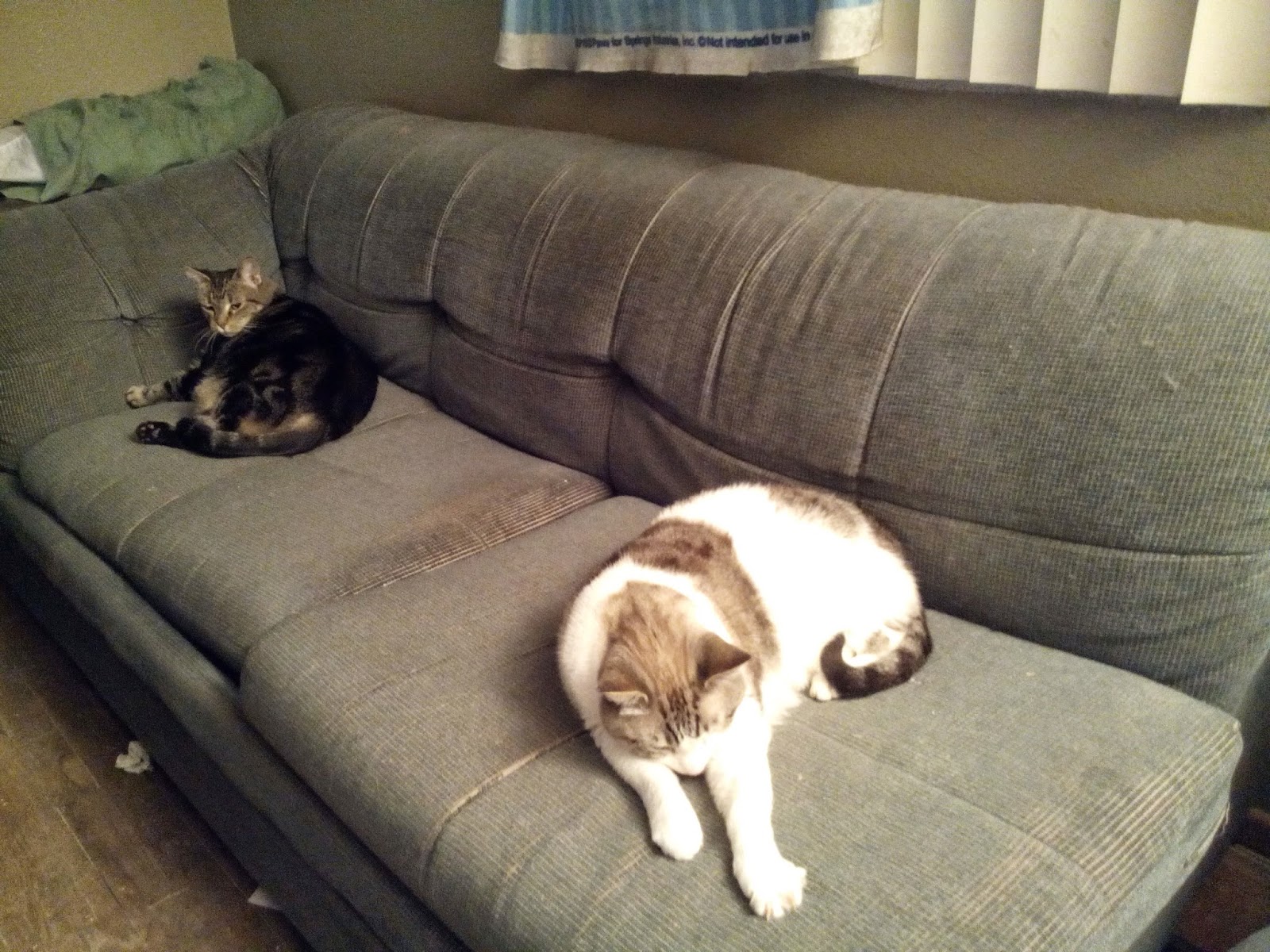 Tabby:  How are you doing today, Starla? I'm glad that you're out here on the couch with me! That's a huge improvement!

Starla:  I'm doing a lot better, thank you! I've been eating and drinking more normally on my own, and I've used my pee pad and the tub, and even used the box a few times! Mommy and Daddy don't seem so worried, either.

Tabby:  Let me do a cursory exam. *checks ears by sniffing in both of them, checks fur and skin color and smell, and checks butt for "output" issues*

Starla:  *licks the top of Tabby's head once, quickly, in thanks*

Tabby:  You smell more normal and aren't as yellow. You don't smell as sick anymore!

Starla:  When I had my week checkup last Monday, the doctor said my blood sugar levels were normal again, my bilirubin was still high but high-normal this time, and the rest of my levels were within normal range.

Tabby:  That's such good news! How was the vet visit, in general? Any more out-of-control woofies?

Starla:  No, thankfully!  There was a woofie, but he was behaving himself in the waiting room.  The same nurse that took me back for bloodwork was there again, just ending her shift, and she saw my name on the board.  She immediately asked if she could be the one to bring me back for my bloodwork again!  She wanted to see how I was doing!  *smiles*

Tabby:  Sounds like a nice lady!  I'll let you rest now, but I wanted to see how things were going.

Starla:  Thanks, Auntie Tabby!  *curls up for another nap on the couch*

Tabby:  Now on to my therapy cat report from a week ago Wednesday:

I was so excited when Mommy said we were actually going visiting again!  I'd missed a lot of visits because she wasn't feeling well, but she's feeling better now so I get to see my friends again!  I didn't even pretend to hide or cry when leaving the house, so she knew I was super-excited to be going to H. again!  I did, however, check over my carrier bag, because it smelled of Starla, even though it had been washed since her vet visit.  I knew I wasn't going to the vet, but the wash doesn't get all the smell out for our sensitive kitty noses!

When we were going down the sidewalk toward the bus stop, we saw a blue heron in the marsh!  That's Mommy's favorite bird, and they always appear to her when she needs a little cheering up.  It was huge!  I'd never seen a bird that big before, so I perked up to watch it better!  It was so cool!

There was a little girl on the bus who didn't really want to be there.  Mommy offered to let her pet me through the carrier, and that cheered her right up.  I like humans of all ages, so that was just fine with me, too!  The little girl was just learning how to talk, but she could say "kitty".  She kept on saying it, pointing at me, and smiling to everyone.  After we got off the bus, Mommy told me how good I had been about letting the little girl pet me.

At H., we went around by ourselves, although I got to see R. when she handed us our list.  We visited seven people, plus a couple nurses and a therapist, but that was just fine.  It's never about how many people we visit; it's about the quality of visits and getting to the people who need to see me at that time.  A few of my regulars were somewhere else, so I didn't get to see them, but I probably will next time.  I wondered where they were, but Mommy told me when I stopped in front of their doors and looked at her questioningly.  One of my friends was sitting in a chair in the hallway, so I got to visit with her three times!  That's how many times we passed her, so we stopped each time because she had forgotten in the minutes inbetween that she'd already seen me that day.  That's what happens with some of my friends, actually with a lot of them.  I guess when you're as old as they are, that happens a lot.  Auntie Sara Kitty had kitty Alzheimers, so I remember how it was being around her.  Same thing with the humans.

M. was very glad to see me, because she'd missed visiting with us the last few months.  She's the one resident there who genuinely wants to know how Mommy's doing and how everyone at home is doing as well as visiting with me.  She's the one who used to be afraid of kitties until she met me!  She still second-guesses when I ask her for pets and when I rub up against her fingers with my mouth, but she only pulls back a little when I do those things instead of flinches totally away from me.  I'm so proud of the way she's gotten over her fear over the years!

A.M. held me and petted me, telling me how nice a kitty I am.  She got to feel me purr this time!  I don't always purr when I'm on a visit, but when I do it's a rumbly-purr that my friends can feel as well as hear (if their hearing is good).  A.M. can't hear me purr, but she could feel it!  I also kneaded away, because she was wearing a blankie.  She called it a lap-blanket, and it was crocheted.  It felt so good under my paws!  I never scratch when I knead, and there are blankies that Mommy can ask for if someone needs to have one on their lap for me.  I'm very careful with my claws, though!  A.M. thought it was so neat that I kneaded for her!  She was as happy about that as she was that I came to visit her!

One of the residents isn't my friend, and doesn't even like cats.  Normally we stay away from her, but she called out to us as we passed her door.  She thought maybe I was the dog, but then she asked about me when she found out I was the kitty.  We didn't go in, but Mommy talked with her through the doorway.

When we got back home, Daddy played a rousing game of red dot with us and we got canned food!  Fun and yummy!  It was a great day!
Posted by PDX pride at 12:05 AM 3 comments: