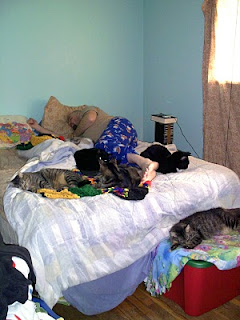 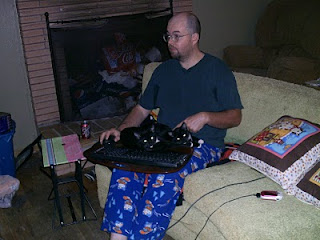 The kittens are 6 months old today!!! Party time, and you're invited!!! 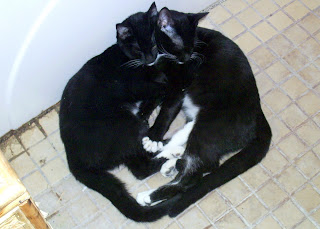 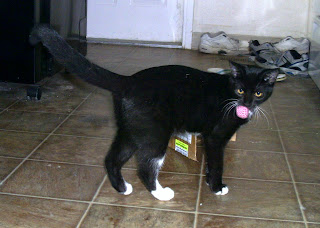 Heimdall's bringing his favorite new toy to the party! 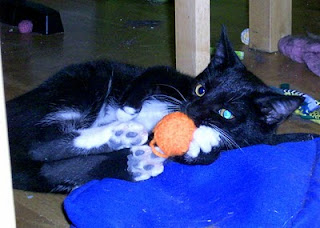 He also really likes this one, can you tell? 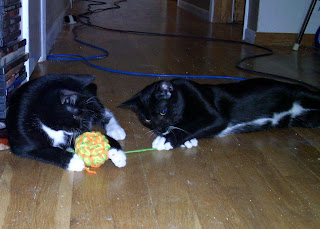 Freya:  Hey, I was playing with this, brother! 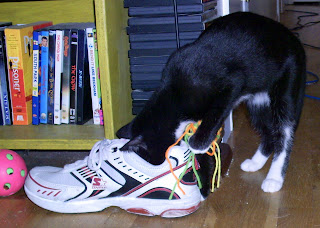 I'd better stick it in Daddy's shoe so my brother won't take off with it.
Click here to read our family's review of our new toys.
But, now, on with our party!  Join in using the comments if you'd like to come celebrate with us!

Attn:  All Catster/Dogster members
Re:  Catster's new policy regarding advertisers

By the new community guidelines, you cannot post anything that could turn someone else away from an advertiser.  See the post that Dogster founder/Top Dog/Top Cat Ted R. wrote here.  Notice that all comments will be moderated first?  They're scared, and they have a right to be!

Catster Hazel Lucy, of the famous Tranquility Blankets and the Purr List, had her diary "cleaned up" (aka censored) by HQ for listing recalls and telling others plainly about Nutro's poison food.  She has also been put on warning that she may be kenneled if she keeps this up.

Other Catsters and a few Dogsters saw this and complained to HQ about it.  Over the weekend, many names on Catster were appended with "who loves Hazel Lucy".  Cats wrote diary entries about her, and some wrote about their experiences with poison food of various brands (mostly recalled).  One cat wrote about her doggie brother who ate Nutro after winning it in a Dogster-sponsored contest (free Nutro for a year).

Catster/Dogster has prohibited anyone from commenting there on what is going on, but many have been making the new policy known other places.  There is a group on Facebook for Concerned Catsters/Dogsters.  Some of us have been posting on our non-Catster blogs.  Many people have been using their FB status updates to keep others apprised of the situation as well.

Some Catsters/Dogsters are leaving because of this.  Some have chosen to stay but not participate as much.  Some have chosen to stay and defy the new rules.  So far, only a few e-mails have been answered, of the many sent to Ted R. about the whole situation.  None of the answers are good; most state that since advertisers pay the bills, they must be respected at all costs, and anyone who speaks out against them is defying the terms of service and will be kicked off the site.

User-friendly?  Community?  Definitely not!
Posted by PDX pride at 6:28 AM 19 comments:

Happy Gotcha Day! Wow, has it really been 3 years??? 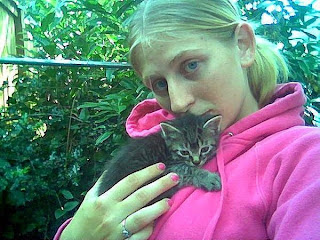 I guess it has really been three years since that day!  I was sooo small, only about 4-5 weeks old.  My brother and I were running across the street in the Portland neighborhood, having fun playing chase, when Mommy Erin saw us first.  She told Mommy Karen, and they both told Daddy that they were going to go out to try and catch us.  Daddy shook his head, but my mommies were adamant that we needed to be caught and brought inside.  Maybe not kept for forever, but at least brought in because we were too small to be out there alone without our momma cat.  Then maybe fostered and adopted out, or maybe kept for forever.

Mommy Erin and Mommy Karen were both in their pajamas, but they didn't mind climbing over the fence and walking around some tires and car parts to neighbor Dale's backyard, where we had run.  My brother took off running when he saw them, but I was a bit smaller so I didn't run that fast.  I also was very scared, having two humans coming after me!  I hid inside a tire that was on its side, and I fit very snugly in the covered part of it.  My mommies had to look closely to see me, but I was staring at them, watching their every move.  They picked me out of there, and Mommy Erin cuddled me while Mommy Karen took the picture above.  Then they brought me inside the green house.

Mommy Karen got a can of tuna and put it inside the big crate, then put that out and watched it.  My brother ran over to chow down on the yummy food, mainly lick it because we were so small, and Mommy Karen closed the door on the crate.  She brought him inside.  His first picture is below, clinging to Mommy Karen. 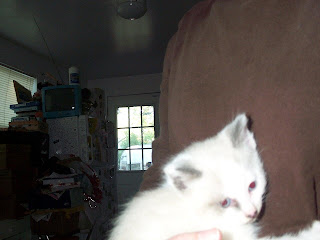 We lived in the plastic crate for a few weeks, with supervised running-around time, and were bottle-fed by both our mommies.  Then, after we were on solid food, my brother Knut was adopted out to a friend of Mommy Karen's.  Mommy Erin was going to keep me, but then she moved and had a newborn human baby to care for, so I stayed with Mommy Karen and Daddy.

My brother Knut with his doggie brother Toby.
This picture was taken last year, and Toby has since passed.
Mommy and Daddy get regular updates on how Knut is doing.
Besides his doggie brother, he has a kitty sister named Nermal who looks like Tabby! 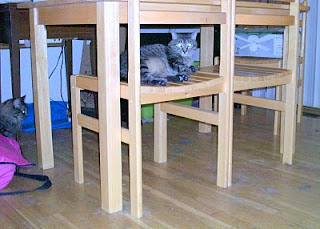 I love hanging out on the dining room chairs!
It's so comfy, and the perfect vantage point to watch the others zoom around the house!
My younger half-sister Little Bit is watching the kittens.
Posted by PDX pride at 12:00 AM 15 comments: