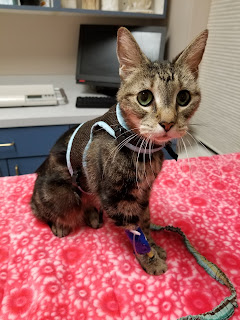 This is a very sad day for us too. Long before I was even here, my human used to read about Tabby's visits, and she wanted a therapy cat so badly that she could take places. And so here I am. So you can see how important Tabby was to us. Lots of purrs to you all.

That is so hard to see them get confused like that. You gave her one last gift by letting her go. Sending thoughts of sympathy in your loss.

I am so sorry for your loss.

As the World Purrs said...

I am sorry for your loss. Sending purrs.

We are so very sorry. Sending you lots of comforting purrs and gentle headbutts.

Katie and The Katz said...

Sending love, hugs, comfort and many purrs...
Katie and the Katz
Psalm 36:6

Dad and I are so sorry for your loss. I only just now found you so we didn't know Tabby, but we can surely relate to what you've had to go through. Sending comforting purrs your way.

I am so sorry to hear this. My heart goes out to you. She was a very lucky ladycat to have you and your love. Fly free, sweet girl <3

I am very sorry for your loss of Dear Tabby....
run pain free dear one
Hugs Cecilia

We are so very sorry for your loss of Tabby. Purrs of comfort and paws of sympathy from all of us here at Alasandra, The Cats & Dogs

We are so sorry. Thank you for loving Tabby so much, and for giving him a loving and wonderful life with you. Sending you gentle purrs and prayers.

Soft purrs, gentle prayers for you and for your little one, may she forever be at peace. Just so you know, we've also sent to you, for Tabby a Rainbow Bridge image ...
Ann, Zoey and Dougie Dog

We are so sorry to read of beautiful Tabby's passing. We send purrayers and POTP to all who love her ! Fly free sweet girl.

We are so sorry for your loss. big purrs of comfort from all of us.

She was so bootyful. We're so sorry fur your loss. We're sendin' hugs and purrayers.

I am so sorry for the loss of your beautiful girl. XO

Thank you so much for loving her and caring for her and most of all, being there for her when her time came. Sending hugs, love and all our best purrs.

We are so sorry for your loss of your beautiful Tabby. Hugs and comforting purrs to you.

I've done this horrible ride and it's so painful. You were there to the end and that's the important part. I'm so sorry for your loss.

We're sending you purrs and prayers at this sad time. (((hugs)))

The Florida Furkids and Mom Sharon

I am so very sorry for your loss. I knows that she was very happy you were there, and helped her on her final journey.
Sendin' lots of love, {{{hugs}}}, and AireZens your way. ♥
Kisses,
Ruby ♥

So sorry of your loss. Fly free beautiful soul💗💗💗

I am very sorry to learn of Tabby's death. I didn't know her, but every death is a loss to the world, and the death of a beloved pet is a grievous loss indeed. Godspeed, Tabby.

Godspeed your journey to heaven Tabby; we are truly sorry and send hugs to mom, dad and the family you leave behind ♥♥♥♥♥

I'm so sorry. Rest in pain-free peace, little one.

You were there for her at this important time, and although your heart may be breaking, I know she will have know you were there.

I am so sorry you lost your wonderful girl.

Dear Tabby was met by the Angels over the Bridge and is young and bright and full of energy as she finds all the best spots to play, hunt and nap. Tabby we shall all meet again some day as it must be. Purrs