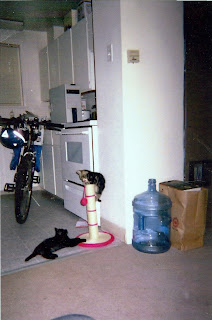 It's my 14th Gotcha Day today! I made it! I'm fading every day, but still hanging in there. I spend my days screaming, hanging out with my purrents, and watching Shadow. He's the new kitten, a new family member, and only 2 1/2 months old so he zooms around a lot. I think he looks a lot like my brother, Carbon, but he definitely smells different, so he's a bit confusing. And, yes, that's me on the top of the scratching post in this pic, and that's Carbon looking up at me. This was just after we got home to Daddy's from the cage on the front porch of the feed store in Clatskanie, OR. I was 4 weeks old and Carbon was 5 weeks old.

Yes, I did say THE NEW KITTEN!!!  Can you tell I'm excited?  Mommy and Daddy were going to wait until after I passed to get another family member, but then they thought it might do me some good to have a job to do again, in whatever time I have left.  I love him!  They went down to Salem Friends of Felines, the same shelter that Freya and Heimdall came from, also the same one that JJ's Scamper came from, originally to look at another kitten but that one had already been adopted.  They thought that Shadow looked so much like Carbon!  He loves ball toys, and he keeps on pawing the jingle ball over to me to bat back to him.  He also likes following me around the house.  We all are learning to love him, and he's so much fun to watch exploring and figuring things out.  We're all a bit happier because he's here, although everyone still is spending a lot of time trying to help me feel better by snuggling with me.

He was born on April 26, 2019, and we adopted him on July 6, 2019.  His shelter name was "Shrek," but he's not green or an ogre, so his new name is "Shadow," which suits him better!  Yes, we've had a Shadow before, the main semi-socialized feral girl at the green house in Portland.  I think she'd like that we have another Shadow who will live as an inside-only cat.  I've taught him to ask for pets like I do, and like I've taught everyone else to do!  He's so smart.  Here's a few pictures, including one of me watching him play with the Crazy Circle, and a video.  More pics to come, as both Mommy and Daddy are shutterbugs! 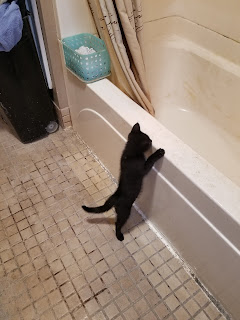 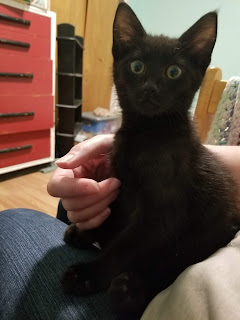 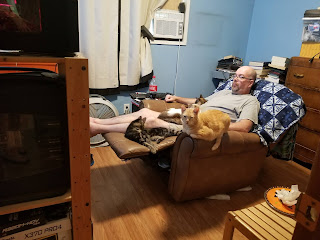 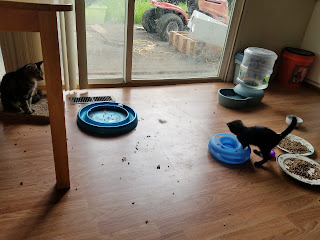 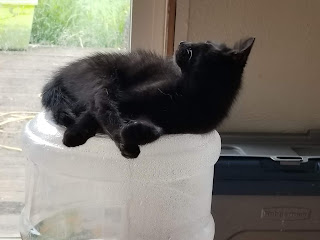 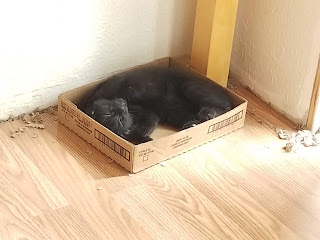 Happy gotcha day, Tabby - I'm so glad you made it! And how awesome that you have a new minion to pass along your wisdom to.

Happy Gotcha Day, Tabby ! We think it is great that you like little Shadow and are enjoying teaching him how to cat and feeling better yourself by being around him ! Purrayers and POTP for you and your family !