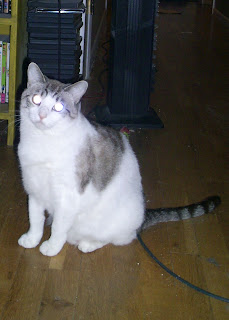 Wow!  Thank you, friends, for remembering my birthday!  Mommy didn't write my blog post earlier, because she's in charge of JJ for today, and a 5-year-old playing superheroes takes precedence over writing a blog post, even if it's a birthday blog post.

That's fine, though, because I got my birthday present last night.  I got to be out for a good part of the day yesterday, instead of being out only at night, but then I went into my room for the night.  Turns out, Tabby had snuck in, too!  She and Carbon were supposed to be out, because we used to fight all the time.  All of a sudden, three hours later, Mommy and Erin heard Tabby talking from the bedroom!  They let her out and checked on me, but I was doing fine.  Tabby was being really kind to me!

They talked it over, and decided to let me out and about with everyone else to see how it went.  I walked under the couch when I saw Tabby and stayed under there for a bit, but then I came back out when Mommy sat down in the chair to read.  Carbon saw me, so I went back under the couch.  Tabby, Carbon, and Little Bit all checked on me at various times, and I growled a little at them, but we all were pretty peaceful the rest of the evening.

When Daddy got home, he was pretty impressed with everyone!  I came out to eat, drink, use the box, and socialize.  I was still wary of Carbon, and somewhat of Tabby, but I got to see both of them acting normally instead of chasing me.  That helped to realize that they were acting normal like I act.  Everyone took naps, and I chose a spot behind the bookcase to take my nap.

All of a sudden, Carbon woke up and wanted to play, but no one else was awake.  He smelled me out and surprised me out of my sleep.  It turned into a rolling cat fight, but I won!  I ran away and he didn't follow me!  We ran over Daddy and woke him up, then I ran past Mommy in the hallway.  She got Carbon out from under the couch and put him in the bedroom.  I got to stay out with Tabby for a while longer!
Posted by PDX pride at 5:51 PM

That was a really good burthday, Starla. Maybe you can spend more time just playing normal with the rest of the crew.

Happy Birthday, Starla! It sure sounds like you had an excellent day. :)

Happy slightly belated birthday, Starla! It sounds like you had quite the adventure!

Mo and The Purries said...

Belated happy birthday, Starla! We're glad you had a good one!

Hope you had a happy Birthday - that is our Mom's birthday too.

Thank you kindly for your comforting words of sympathy about our dear Chica.