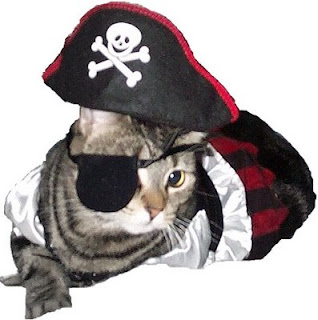 Ahoy there, Mateys!  It be Meow like a Pirate Day for all this fine day!  We be sailin' for calm seas, as it be too rainy here for the likes of me and the rest of the crew.  Cap'n Rori threw Carbon in the brig this mornin' for tussling with Starla in the bedroom doorway while switchin' rooms.  I barreled in to try an' stop the fight, but became part of it, so I got myself outta there an' remained on the edge offerin' comments.  Cap'n Rori stood alongside me an' bopped Carbon on the head each time she saw him.  Mommy clapped, an' Daddy barged in an' grabbed Carbon by his scruff.  Mommy got Starla from under the dresser and then the switching of the rooms was completed without further nonsense from any of the crew.  Starla is now in the crow's nest on the kitchen counter, while Carbon will be confined to the brig in the bedroom until sunup. 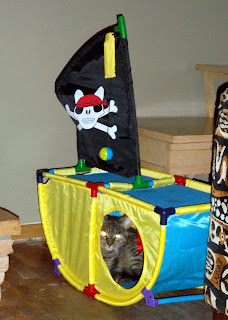 Missy keeping a watchful eye belowdecks.
Posted by PDX pride at 3:21 AM

Ahoy Matey--we be loving on your ship!

Ahoy, Mateys! We thinks ye have a fine sailing ship. We'll be seeing ye on the open seas!

You look soooooo cute in your pirate getup!

Let's sip a cup of rum and nip and enjoy the high seas!

The Florida Furkids and Angel Sniffie

I just LOVE your pirate ship!

Looks like you are still being a pirate. Sending birthday wishes to your daddie. Hope he is having a fun filled day.

We hear your dad is having a birthday today. Happy Birthday, PDX Dad!

Happy Burthday to Pride Dad. We're purrrrrring that you and the kitties got a chance to snuggle on your day.

Happy birthday to your dad! :)