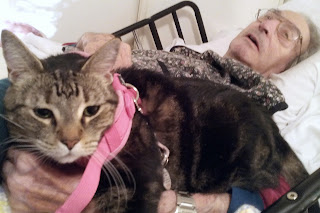 This is Mommy's Grandpa T., her dad's dad.  I visited him and Grandma T., and also Uncle David, on April 27th.  I went visiting at H. in the early afternoon, like I normally do, but then as soon as we got back home I was off again!  Mama Shawnee and Mommy took me over to the T.'s, because they needed some purr therapy right away.  Even though it was for family, the visit was an official therapy visit and I knew it.

I'd been over to their house once before, and they'd been over to see us a few times, but not for a while.  I remembered them, though, and was glad to see them.  Mommy put me on the big bed in the bedroom, and I looked around for my patient.  I could smell that he wasn't feeling well at all, that he smelled like some of my oldest friends at H.  Why wasn't he in his bed like he was supposed to be?  Then I saw him in the special hospital bed next to the big bed.  After my special blankie was set up, I was lifted over and positioned myself in the crook of his arm, as you can see in the picture above.  Grandpa T. consented to have his picture taken with me, and talked to me, petting me the whole time.  I purred for him, and moved around a little so he could pet the easiest places.  He had Parkinson's, so his arm was shaking, but I snuggled against it so it stopped bouncing so much.  He liked that a lot.

He couldn't talk much, but he told me I was a good kitty and tried to purr at me.  While he talked with everyone and Mommy held his hand, I kept the bouncing arm in check and purred, letting him rest his hands against my soft fur.  At one point, I rolled over so he could give me tummy rubs, which gave him the giggles!

After a while, he fell asleep, so then Mommy and I went out so I could sit with Grandma T.  She sat in the recliner with her feet propped up on the footrest so that I had more of a lap.  She loved being able to pet me and snuggle with me.  I purred loudly for her, too, just like I do sometimes for her on the phone.

When it was time for Grandma T. to eat dinner, we all sat at the table with her, I in Mommy's lap.  Uncle David went in to the bedroom to try to get Grandpa T. to eat something.  Mama Shawnee said that we should probably leave in a half hour, so when that time was up I trotted down the hallway in search of Grandpa T. and Uncle David to say my goodbyes!  I knew that was going to be the last time I saw Grandpa T., so I wanted to be sure to say goodbye to him and purr for him one last time.  I hopped up on the bed to snuggle with Uncle David for a few minutes, then got to purr for Grandpa T.  After that, we went back out to say goodbye to Grandma T. before we left.

A few days later, Grandpa T. was transferred to a hospice house, where he spent almost a week.  He passed away on Wednesday, May 11th, at the age of 90.  Mommy's dad was with him when he passed, and that day he also had a visit from the pastors of the church where he and Grandma T. belong.  Grandma T. and Uncle David were just down the hall in the kitchen/dining room/lounge area when he passed, but Mommy's dad went to get them and they spent about an hour sitting in the room after that.

We loved you, Grandpa T.!  Say hi to Grammy and our angel kitty family from us!

We've all been taking care of Mommy, Daddy, and Mama Shawnee for the past week, even more than usual, and giving them our purrs and snuggles continually.
Posted by PDX pride at 1:37 AM

We're sorry to hear about your mom's Grandpa. Purrs to your family....

I am so sorry for the loss of your Mom's Grandpa. My thoughts and prayers are with your family.

We're sorry for the loss of your mom's Grandpa. Purrs

I'm so sorry about your human's grandpa, Tabby. That was great that you were able to visit him one last time.

We're so sorry to hear about your Mom's Grandpa, Tabby. We're sending gentle hugs, purrs and prayers to you and your family.

We're so sorry to hear about your human's grandpa. You and your human visiting must have meant a lot to your family that lat time.