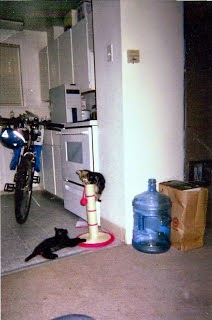 Tabby and Carbon:  Mommy?  Daddy?  Please tell us the story about how you adopted us!

The PDX pride mommy and daddy gather the two nine-year-olds onto their laps and begin to tell the story, petting the purring kitties as they talk.

Nine years ago, two little kittens were waiting in a wire cage on the porch of the feed store in Clatskanie, Oregon.  One was striped and swirled, and one was all black and long-haired.  The tortoiseshell was a little, 4-week-old girl and the black one was a little, 5-week-old boy.  They were from two litters that had been dropped off to be given away, and were the last ones left.  It was a hot, summer day.  The kittens had a litter box, a water bowl, and a bowl of dry food in the cage.

A man and lady drove past.  The people were going on a date to Long Beach, Washington.  The lady saw the sign on the feed store that said "Free Kittens".  All the way down to the beach and all the way back, the man kept on telling the lady, "I want a puddy.  Remind me to stop on the way back so we can look at the kittens!"  The lady was going to adopt two adult cats of her own, but the man wanted a cat or cats, too, because he loved kitties and had always had them in his life.

When the people stopped, the feed store was about to close for the day.  The lady smiled as she saw the cages for a bunny and for the kittens, because she'd had a dream years before that had that exact scene in it!  The man rushed right over to the kitten cage and scooped up the little black kitten.  The kitten crawled up his chest and curled around his neck.  The lady took the little tabby kitten out, and she snuggled right into the lady's elbow.

After a few minutes, the people traded kittens and went inside.  The clerk brought out a cardboard box with holes in it and put the kittens inside.  Once in the truck, the people opened the box to pet the kittens.  "What are you going to name them?" asked the lady.  "Tabby and Carbon," answered the man, smiling.  "A friend has two that look like these, and I helped pick them out, so these two are going to be named after them."  Tabby spent the trip looking out the window, trying to climb the man, and trying to explore.  Carbon got sick in the box and the lady cleaned it up for him.

The people stopped at a pet store to get supplies for the little ones, since the man had not planned on coming home with any furry friends!  When the box was opened at the man's house, the people lifted the kittens out and showed them where their new litter box, food, and water all were.  Carbon hopped into a smelly work boot and fell asleep!  Tabby wanted to investigate and was especially interested in the strawberry cake the lady was eating.  The lady put her on the couch, where she promptly took a nosedive into the cake!  Carbon woke up and helped the people clean Tabby up.

The people settled on the couch to watch a movie and watch the kittens play.  Some time later, they realized the house was too quiet.  Where had those kittens got to?  Not under the bed!  Not in the spare room!  Not under the couch!  How about in the dresser?  There, in the top two drawers, were the kittens, fast asleep!  They yawned and blinked at the people when the drawers were pulled out.  They had used the backs of the drawers as stair steps!
Posted by PDX pride at 4:09 AM

Awww, it must have been uber adorable, your first day in your home, falling asleep in a boot and falling into cake....LOL.

Happy 9th Gotcha Day to you both!

What a wonderful story! Happy GOTCHA Carbon and Tabby!

Happy gotcha day, Tabby and Carbon! When she was a teenager, my human had a kitten who used to get into her parents' dresser drawers the same way you guys did!

Such a sweet story! Concats Carbon and Tabby on your Gotcha Day!!!

What a fun story. Happy Gotcha Day to Carbon and Tabby.

Happy Gotcha Day, Carbon and Tabby. And to you and your parents, many more happy memories to make in the future.