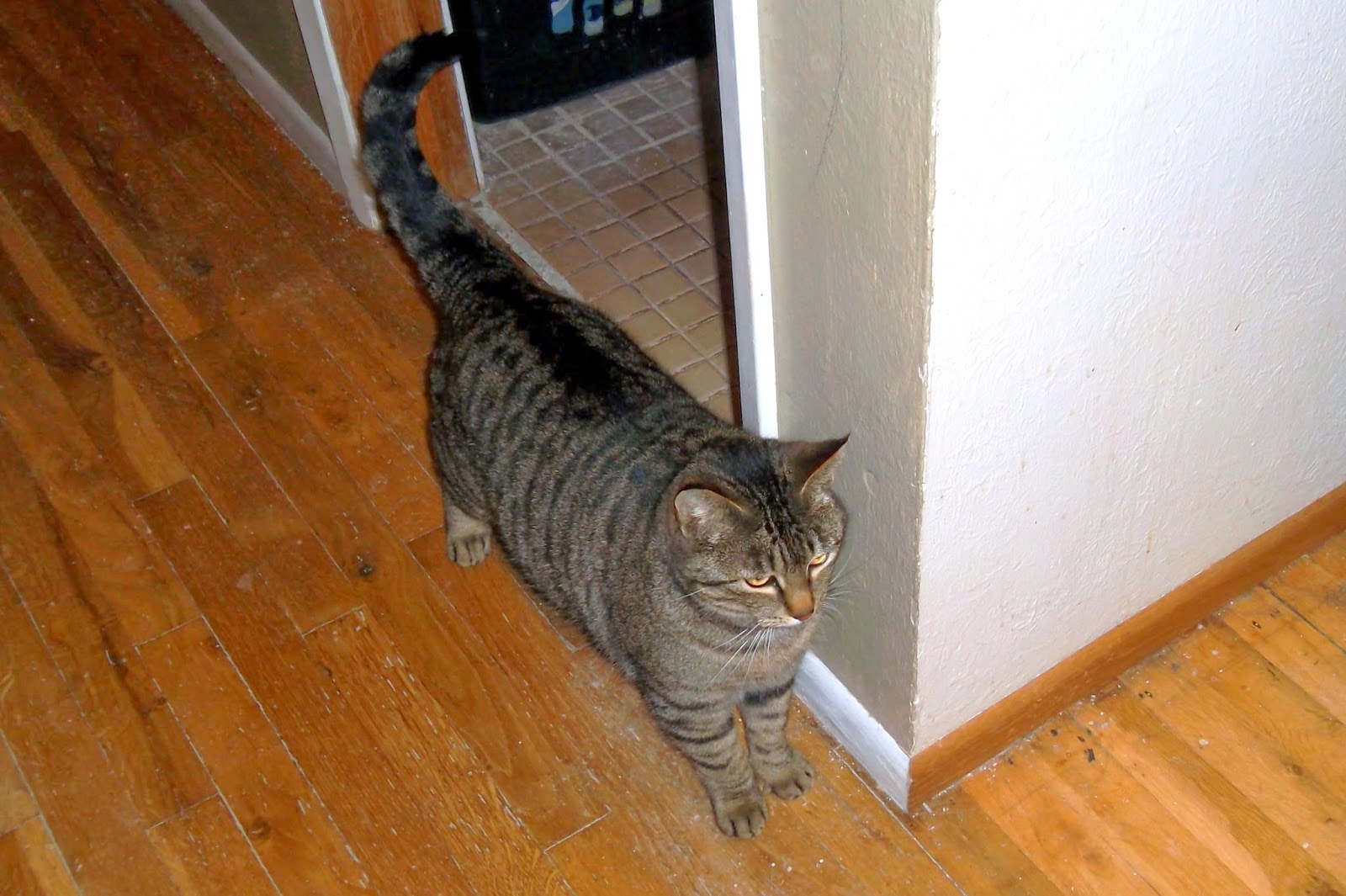 Hi everyone!  I know it's been a long time since I've done a Feral Friday post, but I've got some exciting news to share!  The Grandma person is an ok person!  She gives treats, foot pets, talks softly to me, doesn't chase me, and even will come let me out if I ask nicely enough!

At first, I was scared of her when she moved in a couple months ago.  The other cats love her and she'll even pet them occasionally.  I was scared of her, though.  I don't even know why, except that she was a new human.  She didn't do anything scary, but she was just there.  I didn't like being in the house with her, and would ask for out whenever I realized I was sharing the same house with her.  She tried and tried to show me she was nice, and my purrents told me I was safe and they wouldn't ever bring anyone around who would hurt me.  I believe them, but it still scared me.

I saw how nice Grandma was to the other kitties, though.  She would often pet them with her legs or with her feet, and thank them for giving her leg pets (winding around her legs) and wanting to sit with her (even though she can't have them on her lap due to being sick).  I would hear her coughing and would get wide-eyed, going to Mommy or Daddy for reassurance, but after a couple weeks I wasn't wanting out right away when I would see Grandma.  I would watch her from a chair under the dining-room table or from my comfy chair in the bedroom, then want out when she saw where I was.  I wouldn't hide from her, though, unless she was walking toward me.

One day, the twins had a birthday!  We all celebrated by having a big treat!  I didn't know what it was, but the others were very excited about it, and were milling around Grandma in the kitchen.  She got Mommy to help her open a can of something.  I hung out in the hallway and watched, wondering.  Mommy took out plates and showed Grandma how to spoon out the something onto each plate.  Then Mommy set the plates down on the floor in the dining room! 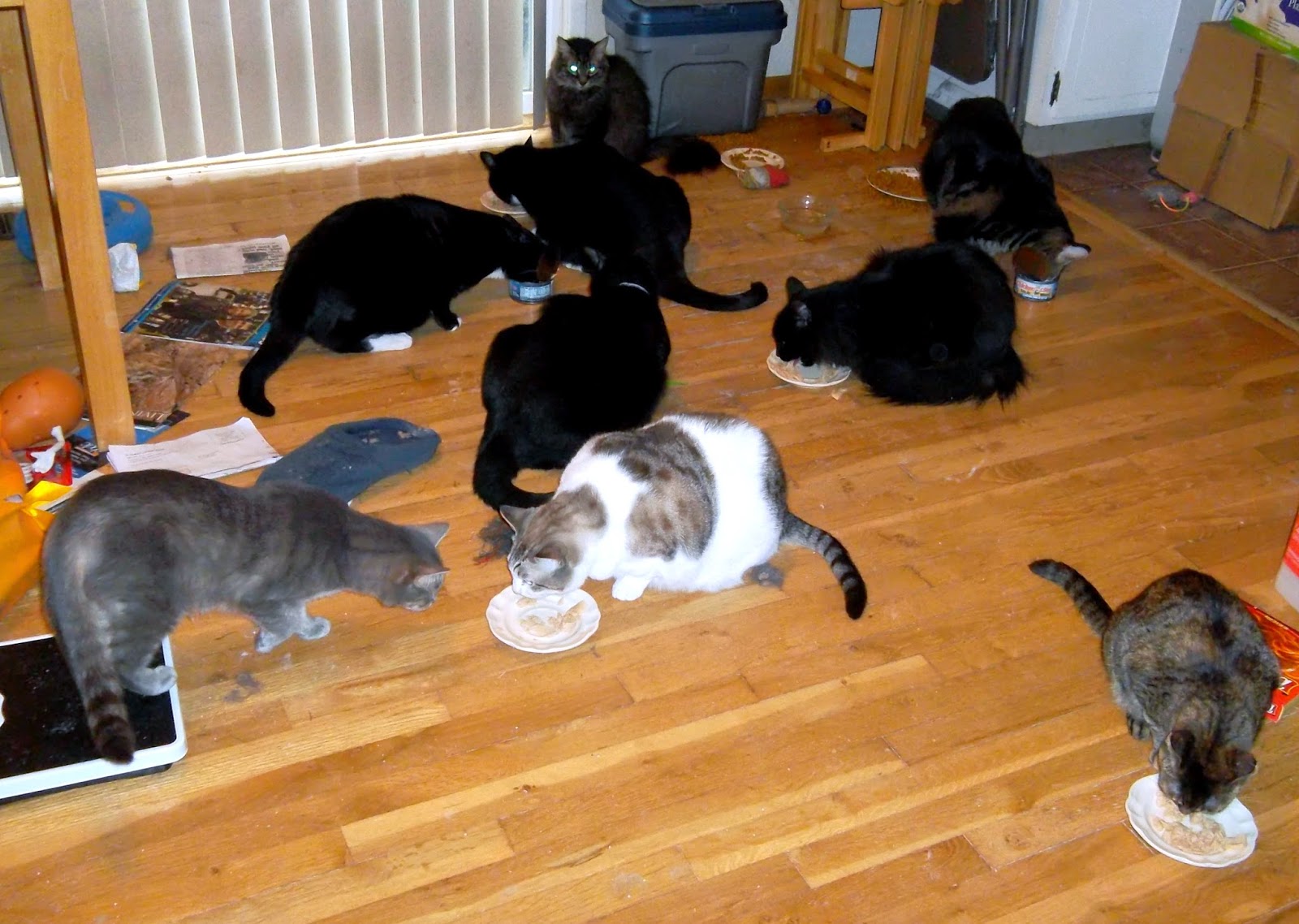 Feast time!  The others invited me to join them, but I said no because I didn't know what the treat was.  It smelled kind of good, but I wanted to watch them eat to make sure it was safe.  They told me it was something called "tuna" and it was a fish.  What fish comes out of a can?  I catch the little fish in the marsh sometimes, but they don't swim around in cans! 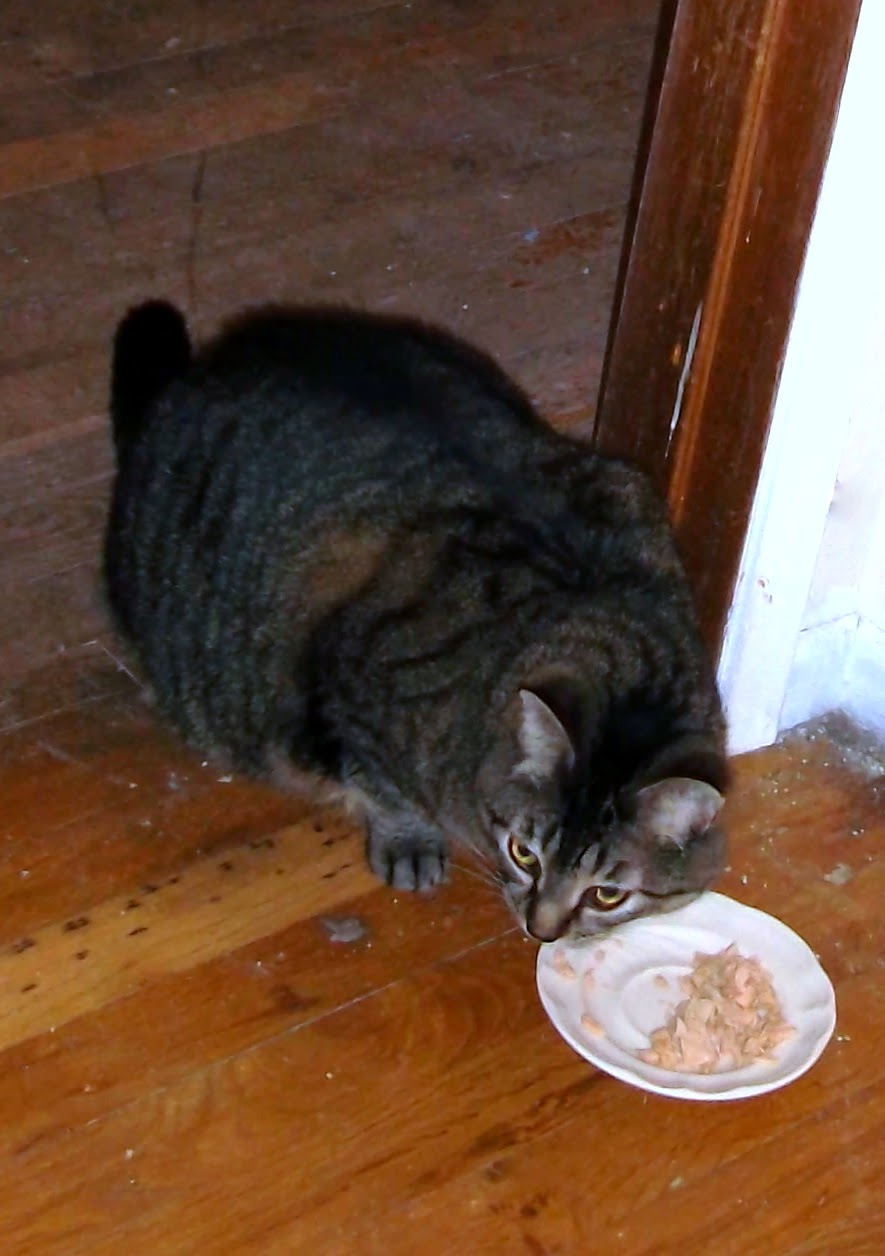 Mommy brought a plate down the hallway to Rori so she could have some of the tuna treat, also.  She likes it, but she didn't want to brave the mob in the dining room any more than I did!  Grandma stayed in the kitchen and made herself something yummy with the tuna, too.  She put something else in it and mixed it up, then put it on bread for a sandwich.  Heimdall went in to see if she had some more for him, but she had mixed the remainder for her food, so he came back out and licked a can. 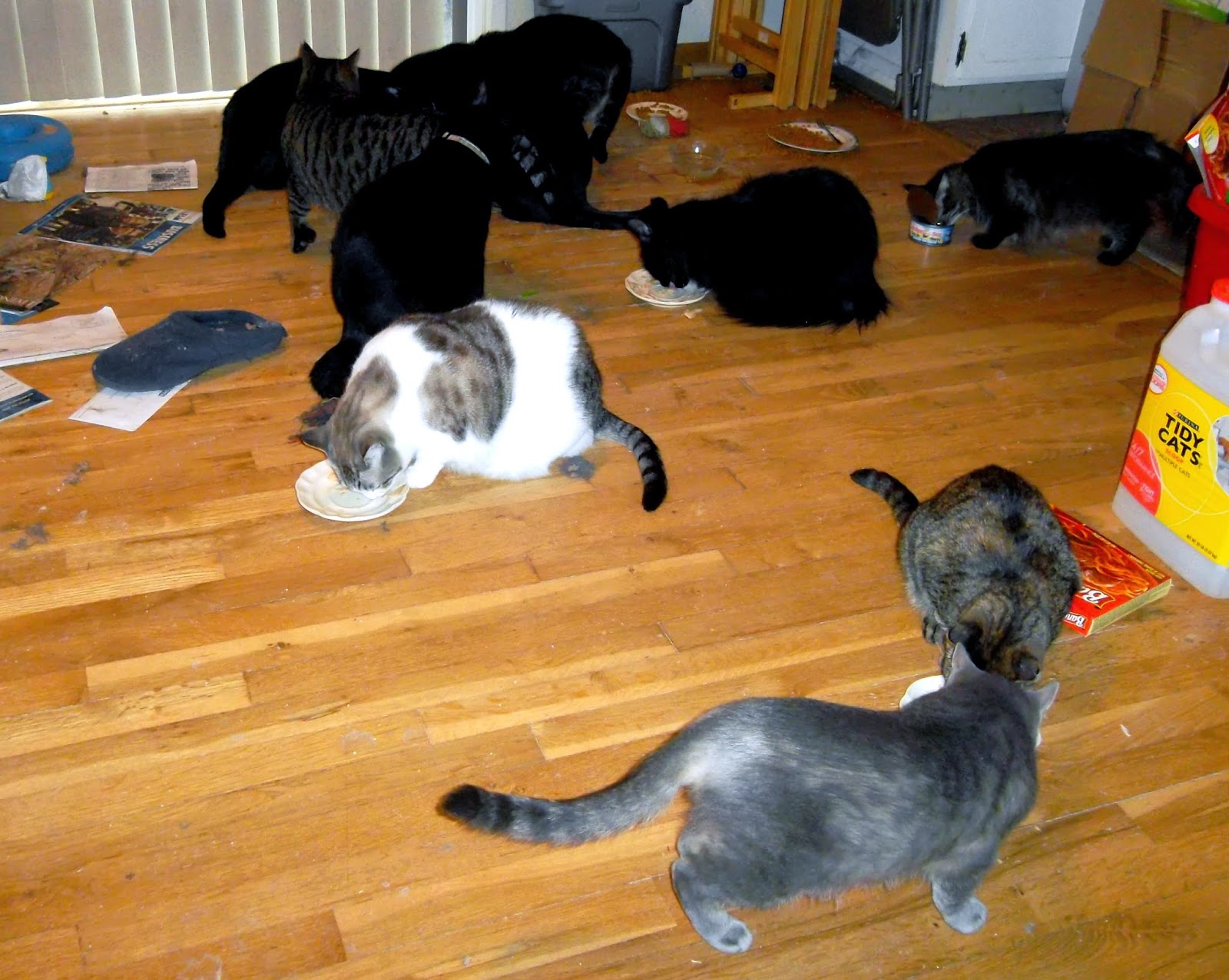 I finally got up the courage to go social-eat and found out the tuna was yummy!  Wow!  Do you see me over in the top left?  I'm trying to get to the plate with Freya and social-eat with her.  Dare decided to share the plate that Missy was eating from, and Little Bit got the can that Tabby had.  Tabby got another can that she and Heimdall shared.

After that tuna treat, I decided that Grandma must be an ok person.  I let her pet me once, and almost have come in the door when she's tried to let me inside.  About a week ago, I wanted out and she was the only human awake.  It was my hunting-time, around 5 or 6 in the morning.  That's when the mice and the birds are sleepy, so I can catch them more easily.  I went over to Grandma, who was in the kitchen, and wound around her legs, talking to her.  She thought I was Tabby at first, because she does the same thing when Grandma's in the kitchen.  Nope!  She looked at my paws and saw that it was I instead of Tabby!  She asked me if I wanted out, so I walked over to the door and pawed it.  She walked over and opened the door for me.  I looked at her and meowed once, then ran out like I normally do.  Thank you, Grandma person!

Since then, I've said hi to her most of the time and she's let me outside a few times more.  Today, I even went down the hall to her room to wait outside the door until she came out!  Hi, Grandma!
Posted by PDX pride at 8:50 PM

Grandmas are ok in our book, too!
We bet you have her wrapped around your paw already. MOL!

Have a great weekend, kitthz!

Tigress, it's okay that it's taken you a while to feel comfortable around your human grandma -- we're just glad you're starting to realize she's a good person!

You and your Grandma will be best friends soon.