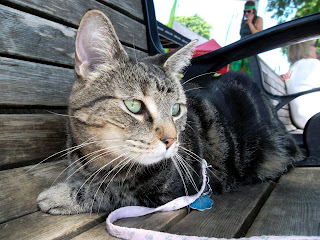 Do I look lazy in this picture?  If so, I deserved my rest!  Mommy and I had just gotten done walking the 2.5-mile Doggie Dash!  Well, Mommy walked it and I rode in the stroller, so I guess I was lazy for that part, but it was hot out today and I got a lot of attention because I was the only kitty there. 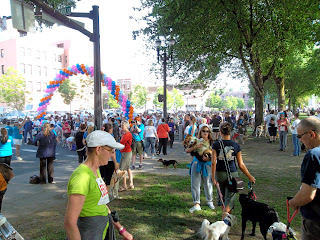 Because of river traffic holding the bridge up just before we got there, we arrived later than expected and were unable to meet Auntie Diana, who helped make the balloon arches.  She works at the Oregon Humane Society.  Isn't it great that all these people (and more) turned out to help the animals at OHS? 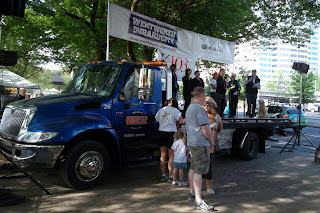 K103, a local radio station, is the main sponsor of the event every year.  The man on the right is from there, the lady on the left is the director of OHS, and the others are also event sponsors.  The man was talking about all the different dog breeds he could see from the truck/stage, then said that he hadn't seen a cat yet but there usually are one or two who come.  Mommy rolled me over to the truck/stage and waited until the awards had been given, then held me up and pointed to me.  The man announced me and Mommy held me up high so that everyone could see the "intrepid cat" who had come!  He was laughing that it was like the beginning scene from The Lion King! 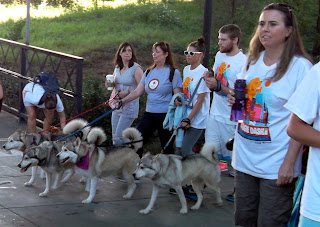 Mommy loves huskies, so she was very happy to see these four!  She tried to get a picture of them posing on some rocks, but it was washed-out because the sun was so bright on the river.  I stayed in my stroller most of the time, but thought that all the doggies were very interesting to sniff.  I touched noses with a few, got licked by some, but put my ears back at a couple who thought they might be able to jump into my stroller with me.  As one lady put it, I didn't want them to burst my personal-space bubble inside which I was invisible (or so I thought)! 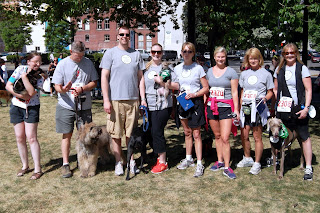 Two of Mommy's students saw her and waved us over before the walk started, so we ended up walking most of the time with the "Bad to the Bone" team.  Kelley (in the middle with the little dog) and Julie (at the end in the vest) are in Mommy's Norwegian language class.  It was fun walking with them!  Of course, we had to stop a few times to let other people take pictures of me, since I was a novelty among the dogs, but that kind of goes with the territory.  I had doggies sniffing me out before their people knew I was there, then would hear, "Oh, there's the cat!"  Mommy just smiled and said how I am such a good girl and such a special kitty to be able to do this.  I agree, of course! 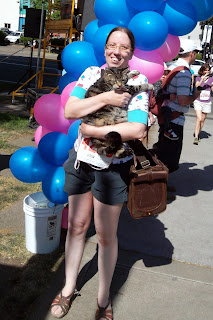 Mommy had someone take this picture of us at the finish line.  I look like I'm unhappy, but it's just because I was looking into the bright sun.  I really was sleepy and wanted to be in the shade napping, so that's when Mommy let me lie down on the park bench and rest.  When we were about to cross the finish line, a couple dog walkers were joking with Mommy:  "We'd better hurry up and cross the finish line before the cat does!"  But then those same people pointed me out to the announcer at the finish line, who announced me again!  Wow, and whew!  Glad I'm home now!

Are you a PhotoHunter?
Posted by PDX pride at 6:59 PM

Paws up, Tabby! That is awesome you did the Doggie Dash - we need more "intrepid" kitties like you!

You did a Doggie Dash in a stroller? Pawsome! You are a hero!

Tabby, you are PAWSOME! How cool that you did the Doggie Dash. Way to go! :)