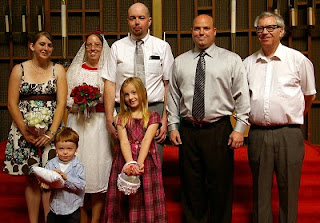 Happy 4th anniversary to our mommy and daddy!


We have been having a very exciting time here!  Last weekend, JJ spent a day and night with us.  It's very interesting having a 4 1/2-year-old here!  Tabby, Carbon, and Little Bit remembered right away who he was, even though they hadn't seen him for about a year.  Freya took a while to warm up to him, and Heimdall ran to hide in the bedroom (behind a closed door).  Missy, who's only seen him once, walked right up to him and rubbed against him for pets!

When Miss Marble came inside, she was ok until she realized that something she didn't know about was walking around and talking.  Then she made a beeline for the back door and wanted out!  Tigress wasn't sure about him, but she ended up coming a few steps in while he was watching quietly from behind Daddy in the hallway.  Later on, she got pets from Mommy through the door while JJ was watching beside Mommy.  Very brave!

Heimdall's saying he wants everyone to know he wasn't as chicken as it sounds.  He really ran to assess the situation, then came back out later after he'd had a good, long nap to think about things!  Poor Rori didn't know what to do, so she ran in circles around Daddy's chair, because JJ slept in the big bed in her room.  After he left, though, she was back up on the bed, then lay on the train tracks in the spare room (JJ's playroom, at the moment).  Rori just didn't know what JJ was, then figured out he's a human kitten.  She used to know what he was, but he's grown so much in the last year!

Remember Tabby writing about Tigress' birdie in the last post?  Well, yesterday Tigress had a baby bunny!  We've got wild bunnies around here, but none in our yard because of the ferals.  Obviously, the girls are such good huntresses that they scared them all away!  Tigress found one somewhere and brought it to show us.  We were watching through the glass, amazed, while she carried it around, let it go, ran a short distance away, then stalked it and caught it again.  Daddy got up to see what we were watching.  He went out to try to get the baby bunny away from Tigress, because he didn't want it to suffer.  She let it go and ran off, then he helped it decide where to go when it hopped away.  Daddy said the little bunny wasn't hurt at all, not even a bite mark!
Posted by PDX pride at 12:33 AM

Happy anniversary to your humans!

Why happy anniversary to your folks!

Happy Anniversary to your mom and dad!

Happy anniversary to the Mom and teh Dad! :)

Belated Happy Anniversary to your mom and dad.

Andrea and the Celestial Kitties said...

Happy Anniversary to the peoples!