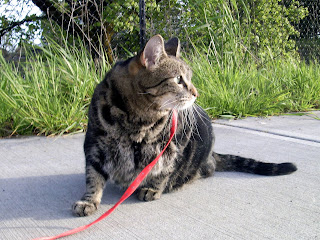 Today's my 7th birthday!  Wow!  Mommy says that I need to behave as a 7-year-old now.  I think she said that because I was screaming at her, though.  She was working on the computer and I wanted pets.  After asking her a few times, I screamed at her.  I'm usually pretty good about asking and waiting, but it's my birthday so I think I deserve a few pets and hugs this early!  I got them, but I had to behave properly for a little while first.  That was fine with me, because I knew I'd get my pets and birthday hugs then.

I've been teaching our raccoon kitty (R.K., the one who acts like she's a kitty) how to behave lately.  I've taught her to lie down on the other side of the glass from me.  I've also taught her how to touch noses, even though the glass is in the way so we can't really touch.  Grandma came by a few days ago and saw us doing both those things.  She loved it!  She hadn't really believed our purrents when they said that R.K. behaves like a kitty, but now she believes it!
Posted by PDX pride at 3:51 AM

Happy Birthday Tabby! We think you can do anything you want today since it's your Birthday!!

The Florida Furkids and Lexi

We thinks you deserve all the pets you want.

Happy Birthday Tabby. Sounds like you are having lots of fun with RK.

Happy 3rd Purrfday Tabby!!!! You should get a ton of pets today!!!

Happy birthday, Tabby! We hope you have a wonderful day, with LOTS of extra cuddles and scritches!

Well, Happy Purrrrrthday, then Tabby kittie. We hope you got lots of treats and cuddles.

Happy birthday, Tabby! We hope your day and year are filled with all the things you love most. :)

On your birthday, we think you ought to get what you want, when you want, and how you want. Happy Birthday, Tabby! Lots of pets and purrs to you today.

Happy Birthday, Tabby! It's my birthday too!