Today in the news...another kitten got adopted and is in his new forever home!
Skylar sent his Mommy Erin a new kitten, a tuxedo boy formerly named Pete but now (at least temporarily) named Scamper!  Mommy, Daddy, Erin, and JJ went yesterday to pick him out!  Erin thought she was going to look at a little orangie boy, but the orangie was adopted already and the other orangie didn't want to come out to be held.  This little tuxie dude went right over to JJ and wanted attention, then was perfectly happy (even purring) while JJ picked him up, carted him around the room, and plopped him on various cat furniture pieces!  It's not every kitten who can put up with a 2 1/2-year-old boy! 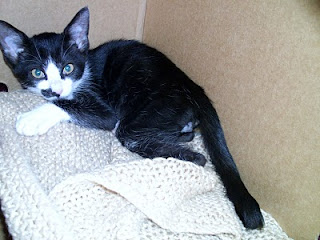 Scamper was a good traveler,
but kept sticking his paws and nose out of his cardboard carrier on the way home
When he got home, Smokey came over to sniff the box and was interested in it, even when he meowed at her.  But when the box was opened and she saw who was inside, she hissed and ran off to the far corner of the room.  Scamper is now in the bathroom at Erin & JJ's, with a radio going.  He meowed all last night until she carried him into the living room to watch a movie with her.  Unless he's being held, he's meowing because he's lonely.  We're all sure he'll be fine in a few days once he realizes that he's somewhere new for real.  Then, the process of introductions to Smokey will begin!  Moke's already sniffing under the door, but not hissing or growling.  Erin's going to find the mesh carrier and use that for introductions.
The people at Salem Friends of Felines were so happy to hear that Freya and Heimdall are doing so well here!  Mommy & Daddy brought the digital camera loaded with pictures and video to show them, and they said to e-mail pics as well so they could share them with the other volunteers who cared for them while they were there.  :)  Once Scamper gets settled, Erin's going to e-mail them pics of him at his forever home, too!
Posted by PDX pride at 12:49 PM

That is GREAT news!

This is wonderful news, especially on this World Cat Day! :-)

What a great story, and cute kitty!

Elvira & I are getting along fine since she came into our lives a month ago.

In fact we got High tog, um, I mean I introduced her to catnip, for the first time today. ;-D

Scamper sure is cute!! We're glad he has a furever home now!!

This is all great news and Scamper sounds like a really nice kitty!