Say No to Nutro Ads on Catster! 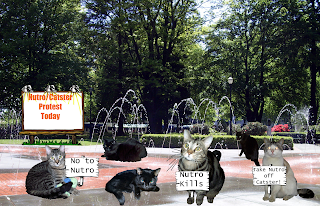 Cats all over Catster, dogs on Dogster and purrents on Facebook are protesting Catster.com and Dogster.com's decision to serve advertisements for Nutro pet food on the Vet Blog.  Why?  Because Nutro has been involved in many major recalls, both involuntary and voluntary, during the last few years.  Some pets who have pages on the site have died from eating tainted Nutro food which was later recalled!  Still, the head of Dogster.com, Ted Rheingold, made the decision to take Nutro's money!

Ted R. and co. have issued a few statements, but no apologies and no promises.  The only explanation they have given was that Dogster.com users were in favor of the ads and that the company didn't think Catster.com users would read the Vet Blog.  We say that's a load of poop!  Nutro food killed both cats AND dogs!  Most Dogsters are against the Nutro ads, so why is Ted R. saying the exact opposite?

If you have a page on Catster or Dogster and would like to participate in the strike, tag a photo "no to nutro".  There are also threads in both the Plus forums and the regular forums on both Catster.com and Dogster.com.  We don't know how long the threads will continue to be open, as the Catster police are out in force deleting posts and diary entries which expose the ad campaign.  Protesters are determined to be heard, and are reposting two or three for every one that gets erased.  There is also a protest group on Catster/Dogster and one on Facebook.
Posted by PDX pride at 6:55 AM

I will have to check this out. Noll has a Catster page....Now if I can remember that password!

How did Ted R. figure out whether the Dogster users were in favor of the ads? And why would Catster users not read the vet blog? I see erroneous assumptions being made here, about both the Dogster and Catster communities, and maybe about cat and dog caretakers in general.

I just find this all very disturbing.

Ka - zar has the say no to nutro graphic on ka - zar's page and have written in Ka - zar diary and we are members of the say no Nutro group.

Can some computer savvy humans get together and make a new kitty facebook-like site that is more cat welfare oriented? My human doesn't know enough, but would be happy to help all she can. Maybe a place made by and for cat people and not as an afterthought to a dog site would do better on focusing on cat lover needs. I, to, think the dogster's wanting nutro adds is probably a lie, but I also think dogthought, like the preoccupation with breeds, is over represented on catster anyway. They have up to 6 items on cat breeds on the catster main page every day. What cat owner is that obsessed with breeds? Most of our kitties are mixed. Let's make something brand new!
People can help each other find no kill shelters and lactating queens for orphans and people willing to bottle feed kittens and cheap spay and neuter resources and other things that will really help kitty owners. So many have trouble knowing where to look, now.

Miss Moppet, there is another site in the works that one of the other Catster moms is designing. She's the mommy to Moozer & co. http://www.catster.com/cats/510371